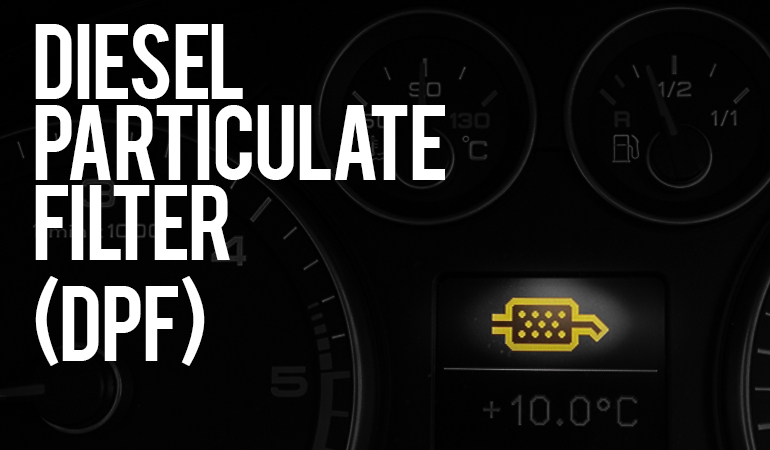 What is a DPF?

A Diesel Particulate Filter (DPF or FAP for short) is a filter found in the downpipe section of the exhaust and is specifically designed to reduce the amount of Diesel Particulate Matter (Soot/Ash) passing through. The objective of this filter is to create cleaner / more eco friendly exhaust gases being released into the atmosphere.

A diesel particulate filter will gradually become restricted and more clogged up as a normal part of it's service life. A process called regeneration is designed to occasionally 'clear out' the particulate filter. Unfortunately this needs specific driving conditions and when these are not met, the degree to which the filter is blocked can surpass the engine managements ability to regenerate the filter - leading to problems with power loss (see detailed list below) and even in the absolute worst case, risk to the car due to overheating of the filter.
The images on the right show different examples of the a DPF, as you can imagine with the first image this is very restrictive and easy to block causing fault codes and running problems on the car.

A blocked DPF can cause many problems including loss of power, economy and throttle response. With more extreme cases, filters that are extremely blocked can cause the engine not to start at all.

Generally speaking a blocked DPF is usually caused by another underlying issue. It is worth undertaking further diagnostics to find the route cause of the blockage.

Things what could lead to a blocked DPF:

There are multiple faults codes and symptoms that can point towards a faulty / blocked DPF. 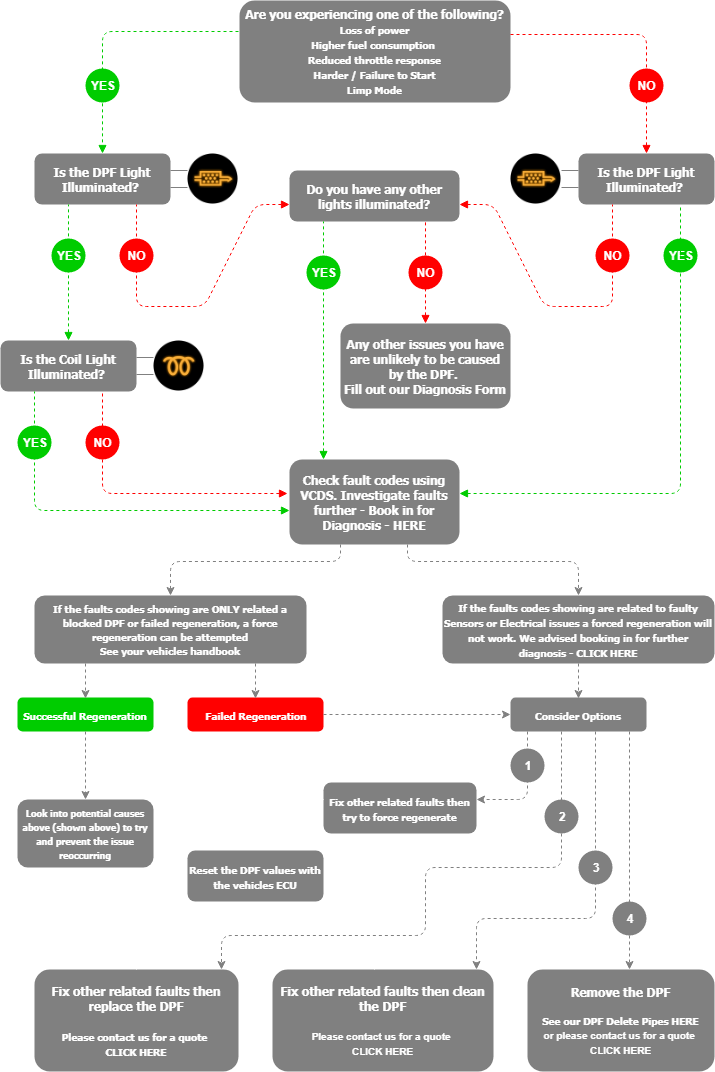 There are 4 main solutions when you experience a blocked DPF. It is also worth diagnosing the vehicle as a lot of the time a blocked DPF can be caused by another issue. (Check DPF Sensors, EGR Valve and Swirl Flaps).

The first solution is to try a forced regeneration. This is for cars that have only just started to show symptoms that the DPF is blocking. If this fails to work the DPF may be too far gone for this process.

Pro's
- If the forced regeneration process is successful this is the cheapest way to cure a blocked DPF.

Con's
- A forced regeneration cannot always be preformed, depending on how blocked the DPF is.

See here for details on the regeneration process - http://wiki.ross-tech.com/DPF

The second solution would be to replace the DPF. Generally speaking, these can be very expensive from the dealers, some costing upwards of £1500 + VAT. Aftermarket DPF's are also available at a fraction of the cost but are usually of lesser quality.

Pro's
- The vehicle will remain as it came from the factory meaning it will stay within the manufactures warranty.
- Most DPF's last in excess of 100k miles before blocking, so you should be expecting this from a new unit.

Con's
- A new unit plus the labour is an expensive job to undertake.
- In terms of tuning, a DPF filter (new or blocked) is a massive restriction to Air Flow and EGT's resulting in lower power figures.

The third solution would be to clean the DPF. To do this properly the DPF would need to be removed. Some companies will offer a cleaning service with the DPF still fitted on the vehicle but this is not as effective.

Pro's
- The price of this is usually a fraction of a replacement unit.
- The vehicle will remain as it came from the factory meaning it will stay within the manufactures warranty.
- After testing it showed a clear drop in Pre-DPF exhaust pressure and lower EGT's.

Con's
- After testing a cleaned DPF it made no difference in power, compared to a blocked DPF (150k Miles).
- In term of tuning, a DPF filter (cleaned or blocked) is a massive restriction to Air Flow and EGT's (Exhaust Gas Temperatures) resulting in lower power figures.

The forth solution is to remove the DPF all together eliminating the problem with no risk of the same problems occurring in the future.

We must advise that in the UK this is illegal. Vehicles with the DPF removed will fail an MOT.
(When purchasing our parts it is the customers responsibility to ensure they comply with rules and laws relating to their home country).

Pro's
- A DPF Delete including software is usually around half the price of a new replacement unit.
- Eliminates all chances of the DPF blocking again in the future and further expenses.
- Removing the filter element will increase air flow and lower EGT's resulting in better performance and economy.

Con's
- In some countries it is deemed as illegal to remove original emissions equipment which includes DPF's and EGR Valves.
- Removing the DPF will affect manufactures warranty.
- Increases the emissions produced by the vehicle.

Here at Darkside Developments we offer a range of DPF Delete options for most VW, Audi, Seat & Skoda TDi engines. For certain makes and models we can offer a complete Stainless Steel Downpipe which completely removes the DPF section of the exhaust and fits directly in place of the standard downpipe. For the models we don't have off the shelf downpipes for, we have all the facilities in our workshop to custom make them on the car.

Another option we have is to cut out the filter from the DPF housing itself, still removing the problem but visually leaving the DPF Housing in its original place for visual inspections. This method can also be carried out at home if you have the correct tools and equipment available.

Once removed you can then send us your ECU to remove the software faults stored on the cars memory. Follow the steps in this listing: https://www.darksidedevelopments.co.uk/products/ecu-dpf-software-removal-service.html

When deleting the DPF in the software we remove all of sensors other than the Pre-Turbo EGT Sensor and Lambda Sensor.
Other companies tend to keep all of the sensors in place and although the some of these sensors are not in use they can cause issues further down the line. If any of these sensors fail it can cause the car to go into limp mode or turn on the fans constantly.

After deleting the DPF you are also able to delete the EGR Valve, this valve is used to lower the emissions of the car but are often prone for failing. The valve works by recirculating some of the exhaust gases back into the engine through the air intake system, reducing the amount of emissions that exit the car.

The problem lies with the exhaust fumes that contain carbon deposits, these fumes are constantly being recirculated through the engine which over time will cause a build-up of the carbon deposits in the intake manifold and other in other parts including the EGR valve. This build up in the valve is often what causes them to fail.

There are two ways of removing the EGR System from the vehicle. The first way is by using one of our EGR Delete Race Pipe Kits, these can be found on our website here: https://www.darksidedevelopments.co.uk/egr-valves-and-parts/

Some cars may have a different EGR Valves or ones that are built into the inlet manifold. If this is the case you can still remove the EGR using blanking plates.

Once the valve is either removed or blanked off the vehicles ECU will no longer get a signal from the EGR Valve causing the emissions workshop light to appear on the dash board. You can send us your ECU to remove the software faults stored on the cars memory. Follow the steps in this listing: https://www.darksidedevelopments.co.uk/products/ecu-dpf-software-removal-service.html

Benifits of removing the EGR Valve

The EGR Valve CANNOT be removed on vehicles that still have the DPF Filter present, doing so would soon block the DPF.

We can remove the DPF software on most models with just the ECU. This is perfect if you want to carry out the DPF removal yourself from home or a garage but don't have the equipment to remove the software. you can now send us your ECU and we will remove the software and send you the ECU back in the post, ready to just plug and play.

Will removing my DPF cause any problems?

No, in fact having a DPF will cause more problems than removing it altogether. Once the DPF is removed there is no need to worry about regeneration, power loss or expensive bills from the dealers.

Does it affect fuel economy?

A blocked DPF will use more fuel than usual as it is making the engine work a lot harder, removing the DPF will help the exhaust gases flow freely which in most cases will see an increase in MPG.

Will it still pass an MOT or other Emission tests?

In the UK it is illegal to remove any of the original emissions equipment fitted to a vehicle from the factory. Vehicles with the DPF removed will fail an MOT.

It is the customers responsibility to ensure they comply with rules and laws relating to their home country. Darkside Developments accepts no responsibility for the use of this part on the public highway where removal of emission controls is prohibited.