SKU:
WAS-040
Shipping:
Calculated at Checkout

Verkline Spherical Adjustable Rear Trailing Arm Kit for Audi RS3 / S3 / A3 8P / Golf MK5 / Mk6 / Audi TT 8J / Seat Leon 5F Anti-squat suspensions are used to reduce body squat by altering the rear suspension so that the forces resulting from accelerating pass through the control arms and suspension linkage rather than through the coilovers or struts On these vehicles rear suspension setup, we can define our anti-squat by inclination of a line which connects the wheel center and chassis mounting point of the trailing arm. Most of the cars are lowered with aftermarket suspension components. In the picture below the car is lowered and OEM wishbone (and our +0 setup) in MQB car has anti-squat line pointing down (red line), it means that the car has negative anti-squat value. It causes excessive suspension displacement under acceleration and reduces responsiveness. To correct this Verkline have come up with an adjustable rear trailing arm. When the wishbone in the car is used in +20 setup anti-squat value (green line) is corrected and it is back to factory settings.

If the car wishbone is used in +40 setup anti-squat value (blue line). It makes suspension move even less, thus resulting in faster response of the car from stand still or when exiting the corner. Also when there is less suspension movement camber and toe are less affected (better predictability of the car) With the increase of anti-squat You also get higher values of rear anti-lift. It keeps Your rear suspension low under braking, which increases grip and car predictability. This allows You to brake later and go into a corner with higher speed and confidence. 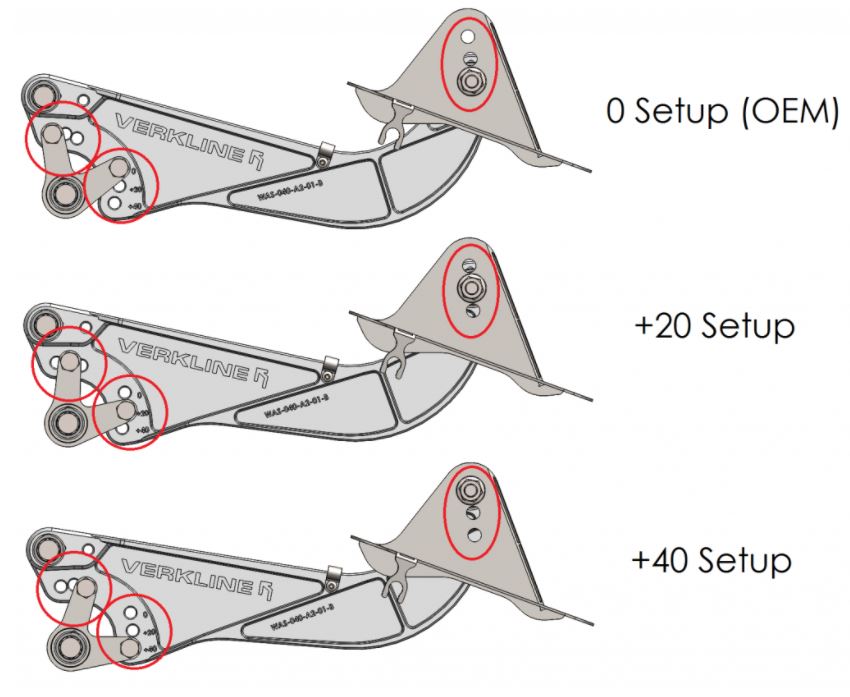 3 position anti-squat and anti-lift adjustability (0 / +20 / +40)The OEM wishbone bends during normal operation and this increases when the car is lowered or camber / toe is increased. Verklines CNC billet wishbone has spherical bearings to avoid that and it is also a big increase of stiffness, resulting in better handling in corner exit and under accelerationHigh quality, metal spherical bearings instead of rubber bushings, meaning you will not lose the geometry that is set when doing alignmentSame weight as OEM part, regarding additional functionality

Because of the adjustable design it is necessary to use dedicated rear sway bar adjustable end links. OEM and other aftermarket rear end links will not be suitable.

This is a bolt-on kit, no modifications necessary to the carWishbone comes pre assembledCNC machined arm out of 7075 T6 aluminumTIG welded high strength steel mountingsParking brake line bracketsIncludes all necessary parts to mount on the car

This Kit Consists of:


This Kit will fit the following Vehicles:

Installation of this rear trailing arm kit will introduce some additional NVH (noise, vibration, and harshness) transfer into the cabin.