The first round of the 2021 Season of the MSV Trackday Championship and MSV Trackday Trophy was at our 'local' track, Donington Park, on the National Circuit configuration.

For those not up to speed, the class structure is based upon Power to Weight ratio which is a very good way of keeping different cars on a level playing field. It also works well for 2 driver teams, as it is a 45 minute race with a mandatory 2 minute pit stop, which allows for a driver change. We decided that I will run alone in the TDC, and Ryan will share the drive with me in the TDT races.

The TDT regs are pretty much the same, other than tyres must be from the Motorsport UK list 1a, 1b or 1c. Slick tyres and motorsport wets are not permitted.

Below is the layout of the Donington Park National Circuit: 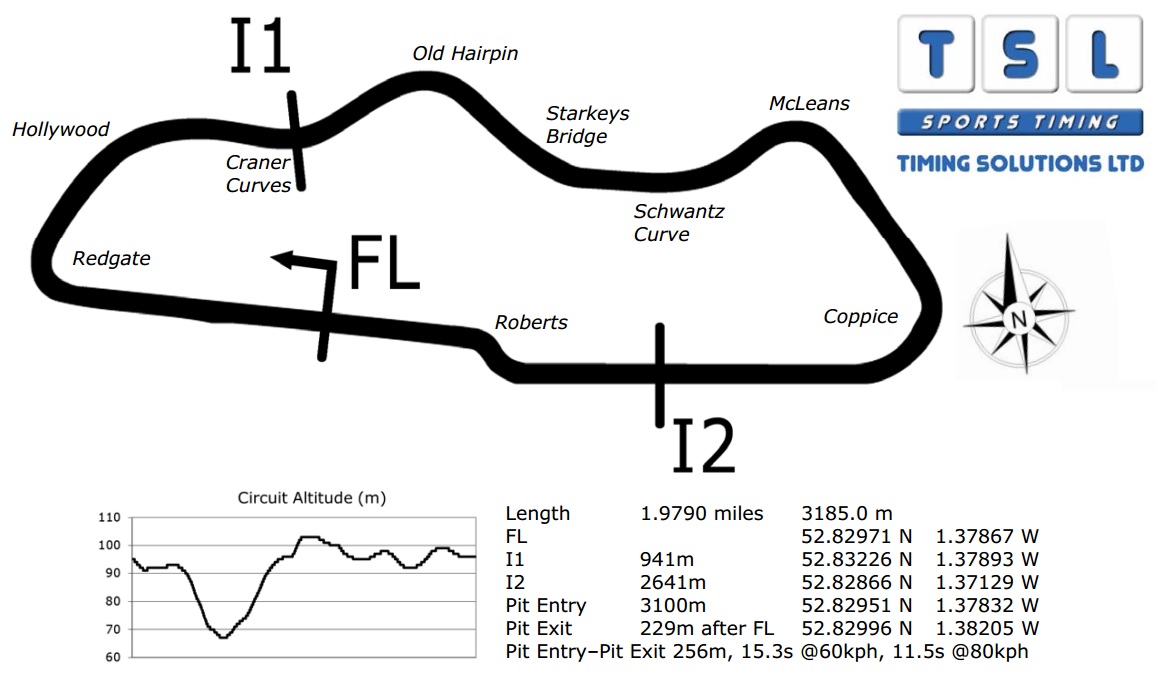 We had booked to do the TDT on the Saturday and TDC on the Sunday, but MSUK decided not to issue 2 day permits for events, so they got squeezed into a single day event on the Sunday, as you can see below, it meant we had back to back qualifying sessions, with a tyre change and refuel needed between! 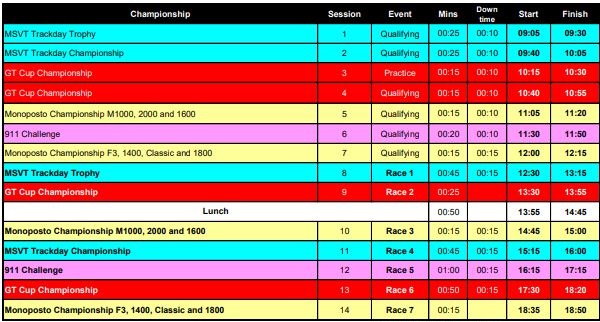 With an early start, we made sure the Golf was ready to unload from the trailer and get straight to assembly area when we arrived at the track. Luckily the weather was as expected, cold but dry, so we did not need to make any setup changes.
I managed to get straight to the front in assembly area to be the first one out. Just where you need to be for a busy qualifying! I would go first, then Ryan after. 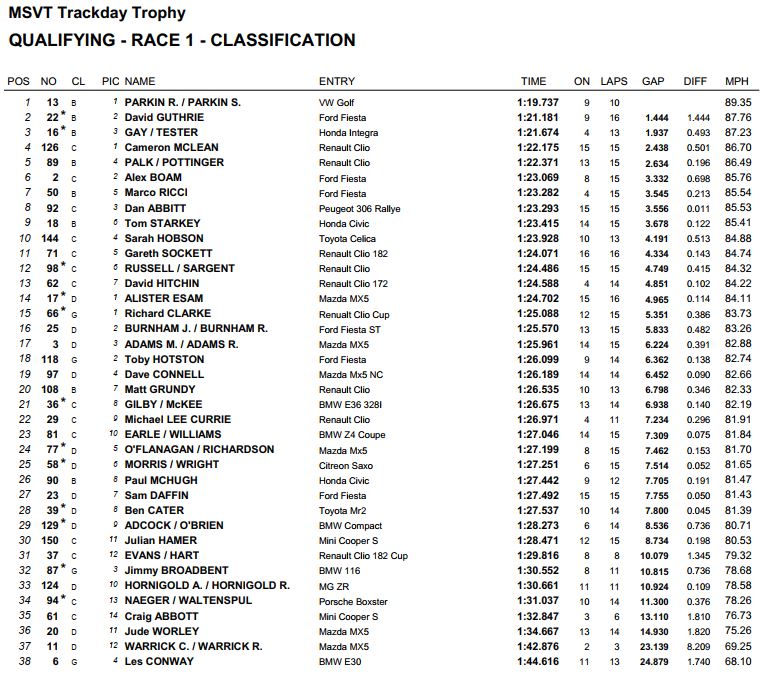 As you can see from the above, we did pretty well! I had done a 1:20.214 which put us comfortably on Pole. Ryan was meant to go out and just get a feel for the car and track, and instead beat my time on his first flying lap, and smashed it the next time with a 1:19.737. 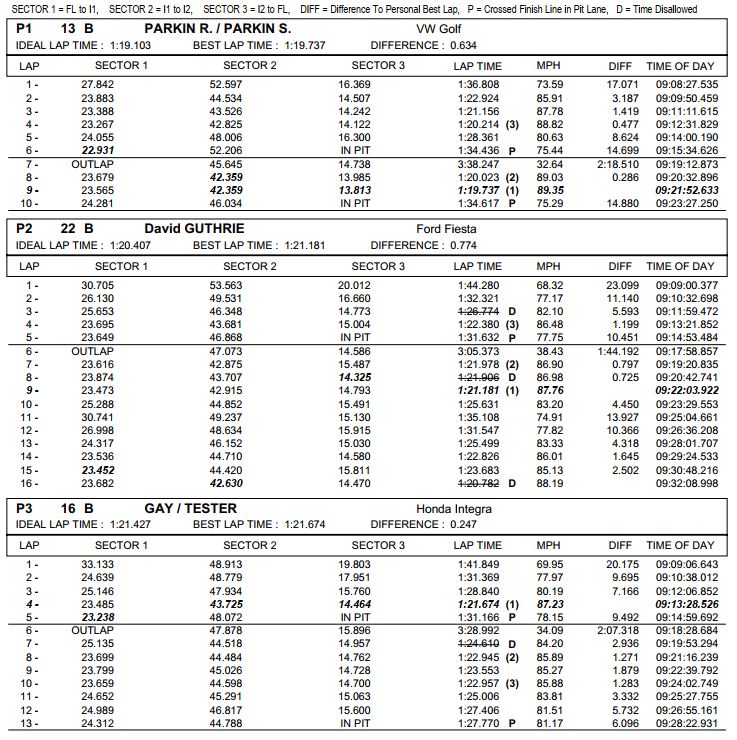 Behind us the order was shuffling around, with Dave Guthrie of BOAMerang ending up P2 (to his surprise I heard) in the Fiesta with Sam Gay and Colin Tester in the Integra ending up P3. 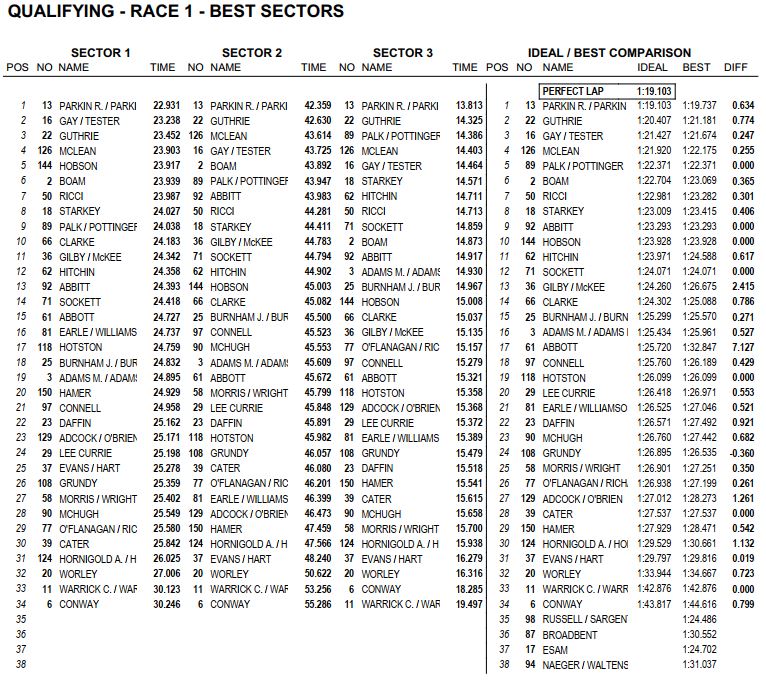 We were significantly quicker than everyone in all the sectors, but in the paddock afterwards, I talked to Colin Tester and they were went out on the R888R Tyres to save changing between sessions (as they were doing the TDC as well) so we expected their times to improve a fair bit when they put their Yokohama A052s on (the same we were running) for the race.

A video of mine and Ryan's fastest lap times is below:

We cut the TDT qualifying short to give the guys a few minutes to change to the R888R Tyres and add a splash of fuel before I made my way to the assembly area, this time at the back of the pack! It was going to take a different strategy to get some clean air. 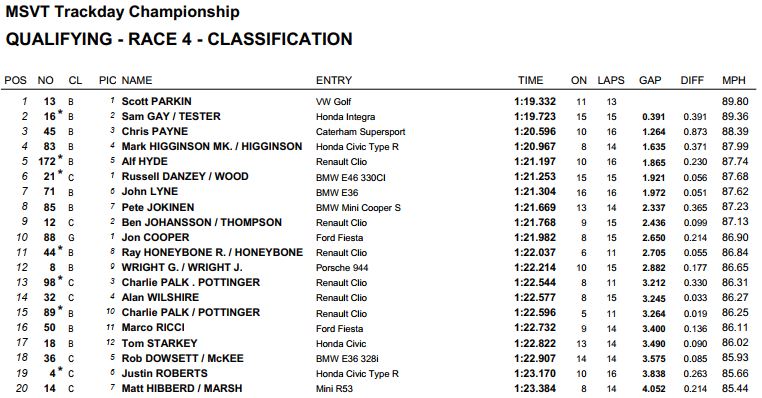 As expected, the Integra was much closer to us now we were on the same tyres, but there was still enough of a gap for me to not worry too much! 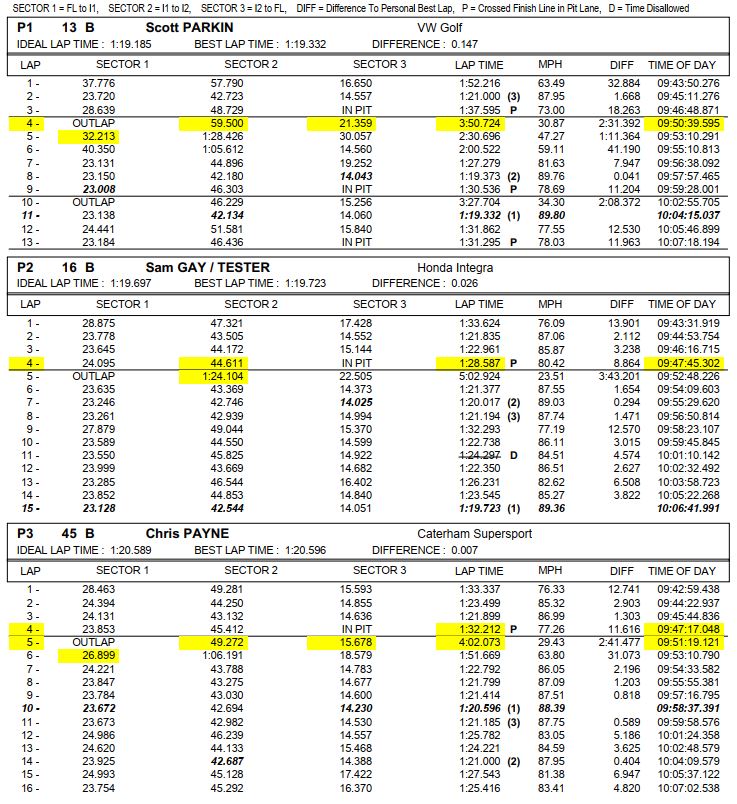 The session was split up a bit as we had a safety car while Ray Honeybone in the Clio was dug out of the gravel. It didn't cause too much trouble for us, we needed to get the tyre pressures right as we did not have a baseline for these, so I did a quick pitstop while the session was neutralised. 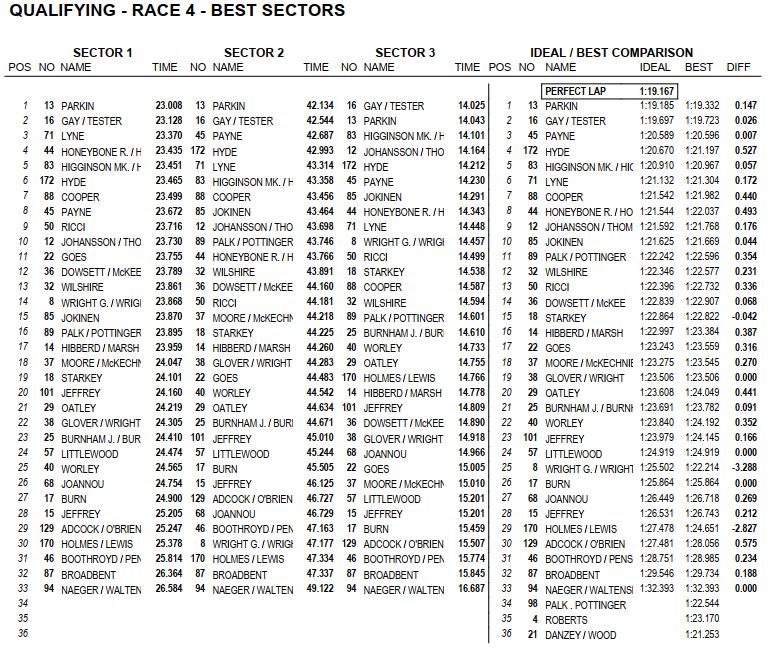 This time the sectors were not a full house for me, with the Integra pipping me by 0.018s in sector 3. I will have to try harder in the race!
The Pole lap is shown below:

With the chaos of qualifying back to back out of the way, we had a bit of time to get the car checked over before the Trophy Race.
There were no real issues to report, so it was just a case of putting the Yokohama tyres back on, adding some more fuel and giving the car a full once over. With no issues to report it was a pretty chilled morning!
We were on Pole, and as I had the TDC race later, Ryan was going to take the wheel for the first stint. 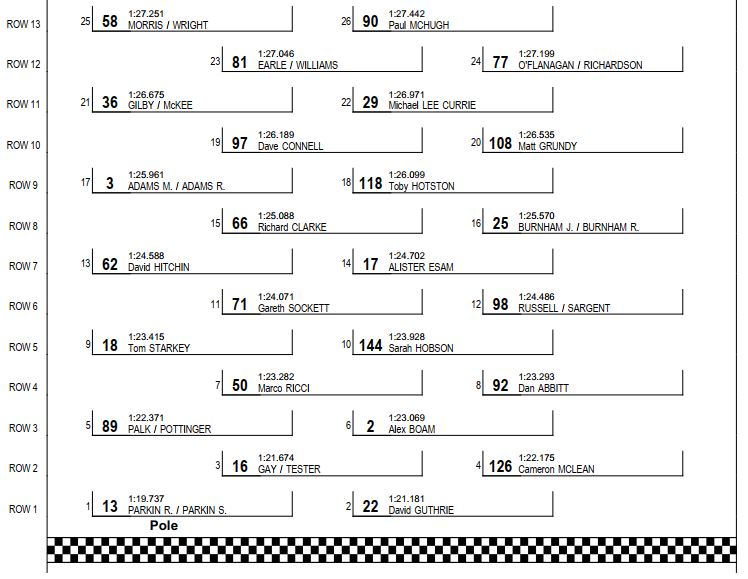 You can watch the full video below, or read the race summary further down the page:

With Ryan sat in the Assembly area, it was a bright day and a low chance of some rain at some point during the race. The A052 tyres are great in changeable conditions, so we did not go for an aggressive wet setup and left it has we had in Qualifying.
The TDT has no Green Flag Lap, so you are sat on the grid with cold brakes and tyres. A recipe for disaster as I had found back in 2019 when the Ibiza was T-Boned at Redgate!
Ryan got a decent start, maybe a little too much wheelspin but he managed to keep ahead of everyone into Turn 1. He then managed to pull a decent lead as everyone else jockeyed for position behind. As the train headed towards McLeans at the far end of the circuit, a thick cloud descended overhead and a strange sleet and hail shower emerged. Talk about tricky conditions!
Even so, Ryan drove perfectly, with only a few small brown trouser moments as he struggled to find grip in the forever evolving surface. Eventually the gap to Colin Tester in the Integra was yo-yoing between 8 and 10 seconds depending on how they both did through the traffic. I was stood in the pits ready to go when Ryan came in for the mandatory 2 minute pit stop, at any point between 15 and 30 minutes into the race.
With 14 laps down, Ryan overtook a Class C Porsche Boxster at McLeans, then as he was looking in his mirrors to move across to the left before turning right at Coppice he went a little too far over the kerb, and it was still wet from the earlier freak weather so when he flicked it right, the back end overtook to front, sending him backwards into the gravel. Not ideal!
So as you can see below, a DNF! 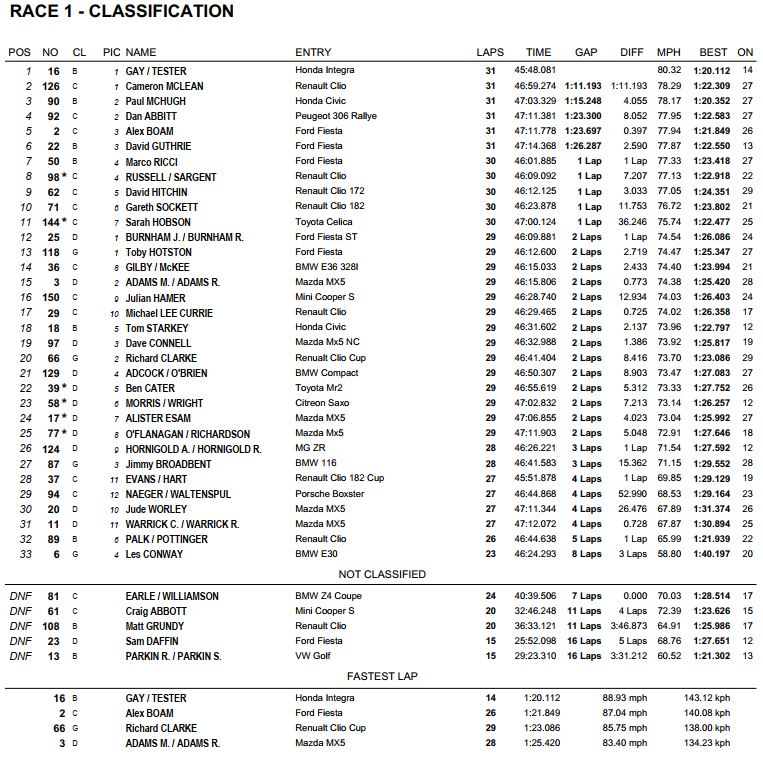 The fastest lap of the race went to Colin and Sam in the Integra, with a 1:20.112. You can see below that the track was constantly improving, so I am sure Ryan would have got into the 1:20s within a lap or 2.

You can see the gap between Ryan (car 13) and Colin (car 16) was up and down during the race, depending on traffic. 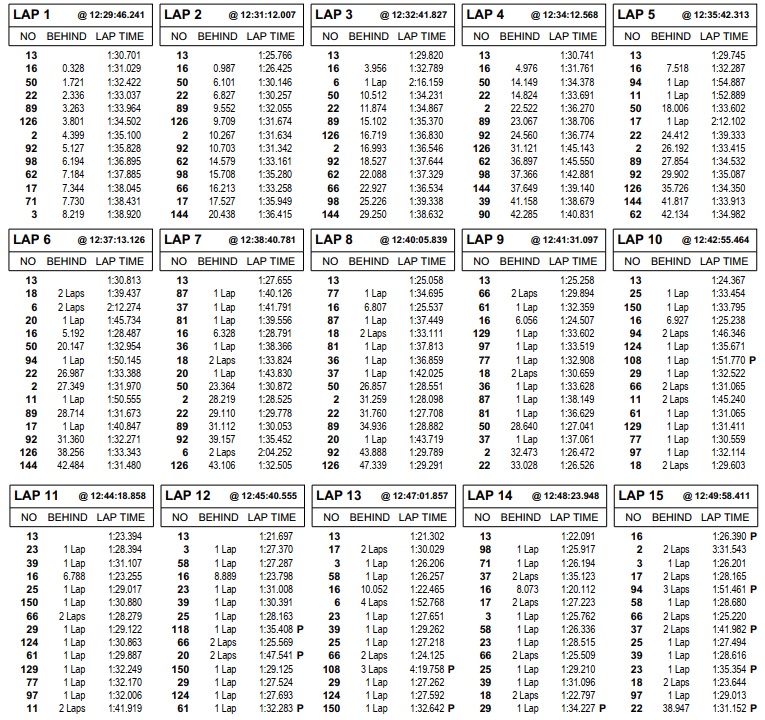 The Fastest Lap was changing hands pretty often as well during the race!

Luckily Ryan's trip into the gravel did not cause any damage, we were just finding gravel in every nook and cranny possible, even in the vanes of the brake discs on the front!
The weather was looking a bit ropey again, and knowing how bad R888Rs are in the wet, we decided to go for a semi-wet setup, so slackened the ARBs and softened the shocks a little. 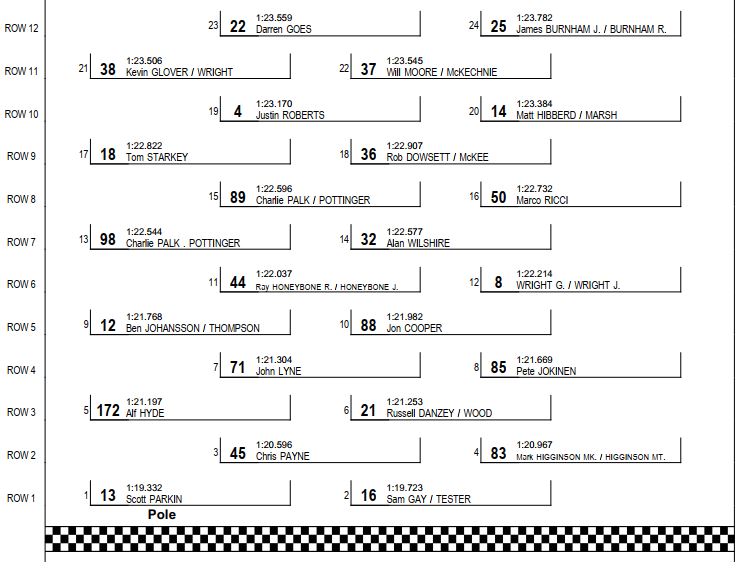 You can watch the full video below, or read the race summary further down the page:

I got what I thought was a good start, until Chris in the pink Caterham shot passed me like a scalded cat! He always struggled to get temperature into his tyres though, so I knew the best strategy would be to get him in the first few laps and then keep him behind as long as possible.
The plan worked perfectly, as I was able to get back past him at the Roberts Chicane with a good exit at Coppice, then the plan was to keep ahead for the rest of the race, isn't that everyone's plan?
After that, the race was pretty straightforward, Chris made a few lunges that I was able to cover, the most successful into Redgate where he got in front until I took a normal racing line and got back ahead.
As I expected, Chris really struggled in the traffic, mainly because no one could see him in their mirrors, so he had to be extra cautious. Luckily it is hard to miss a bright red Golf! 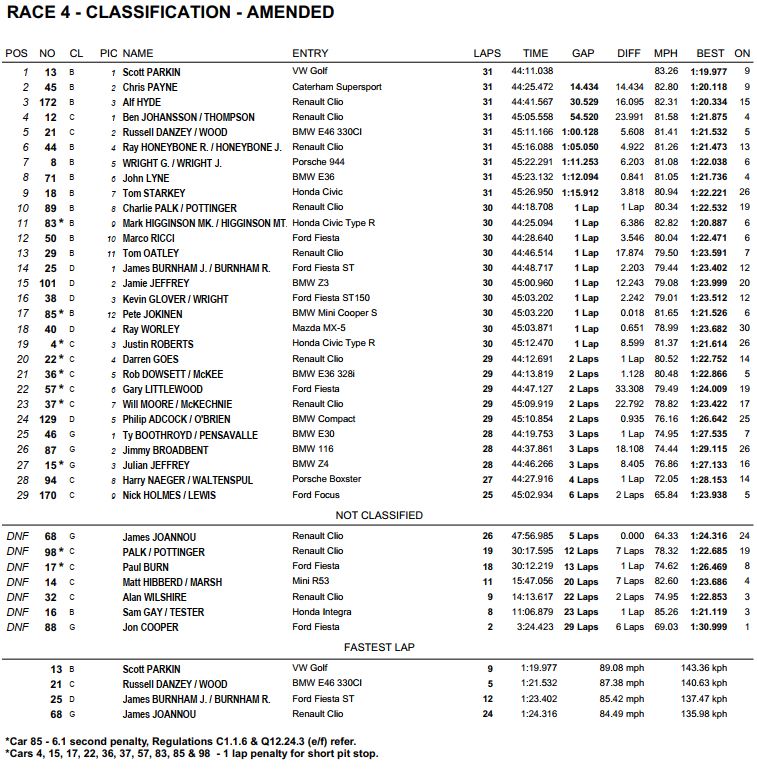 We made a complete hash of the pit stop, not leaving enough time to get to the Pit Exit, so I was almost 9s over. Luckily everyone else were the same, Alf Hyde in the Clio 172 did not realise we were back to 2:00, so did 2:33.5. He only finished 30.5s behind me in 3rd position, so it would have been an interesting 2nd half of the race had he done a 2:00 pit stop! Mark and Matt Higginson in the Red Civic were actually 2nd on the road, and jumped me in the Pit Stops, but their time was 1:57 so they got a (very harsh) 1 lap penalty for it applied after the race. 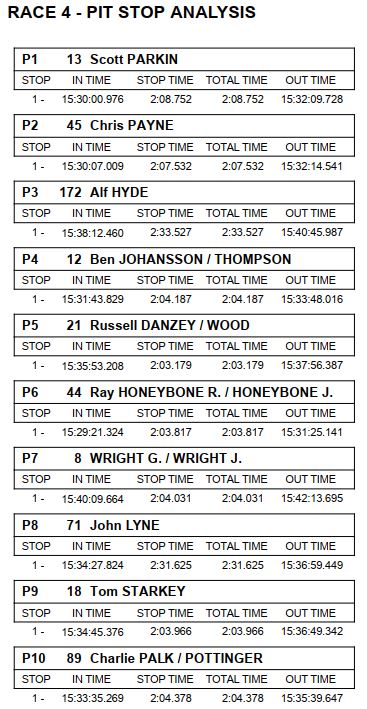 The laps were not as consistent as I would have liked, but we were battling for the first half of the race, then dealing with traffic in the second so it was not too bad really. 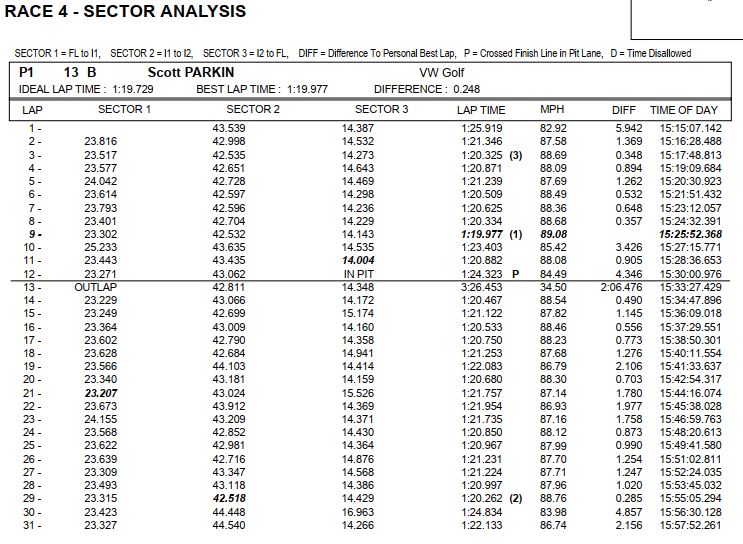 Chris had a few fastest laps during the race, but I kept it after lap 9 for the rest of the race.

The best sectors were not mine either in this race, with the Golf only 2nd quickest in sectors 1 and 2, and 4th in sector 3! I need to work on the chicane! 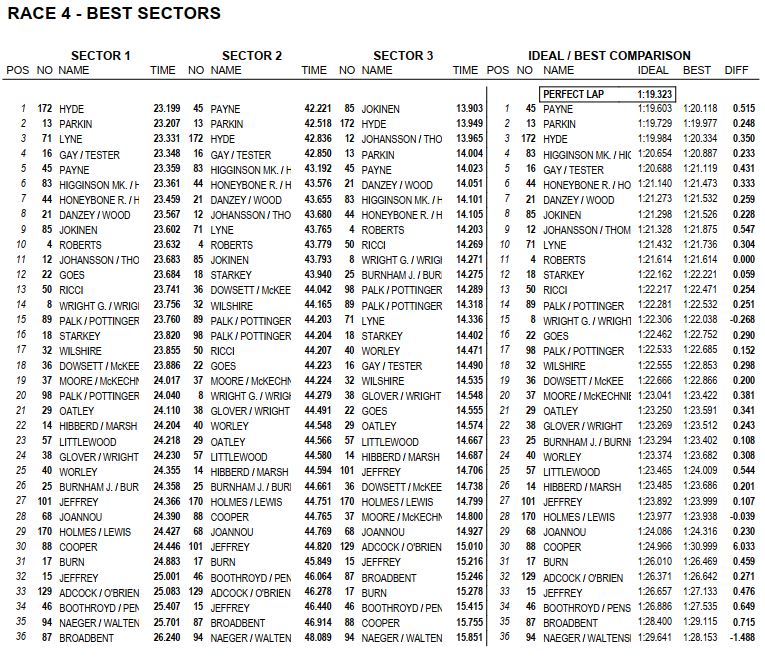 We have done a VLOG on the weekend for those with less of an attention span!

Thanks to all the team, we put in a lot of preparation ready for this first weekend, and it really paid off. Two Pole positions, a fastest lap and a win, and almost another win! Nearly the perfect weekend!

Check out the Club Racing UK Podcast on BuzzSprout or YouTube