After a great opening round of the MSV Trackday Championship, which we discussed in our blog, and the terrible accident in the TDT on the same day, also discussed in this blog, we had a LOT of work to do to get the car ready for the next race.

Round 2 brought us to Snetterton, a circuit we had not been to since a very wet March 2018 when we launched the CitiGo. We had hoped to get the car ready for a trackday mid-week to do some testing, but things don't always go to plan, so the first outing since the crash was Qualifying at 9:00! 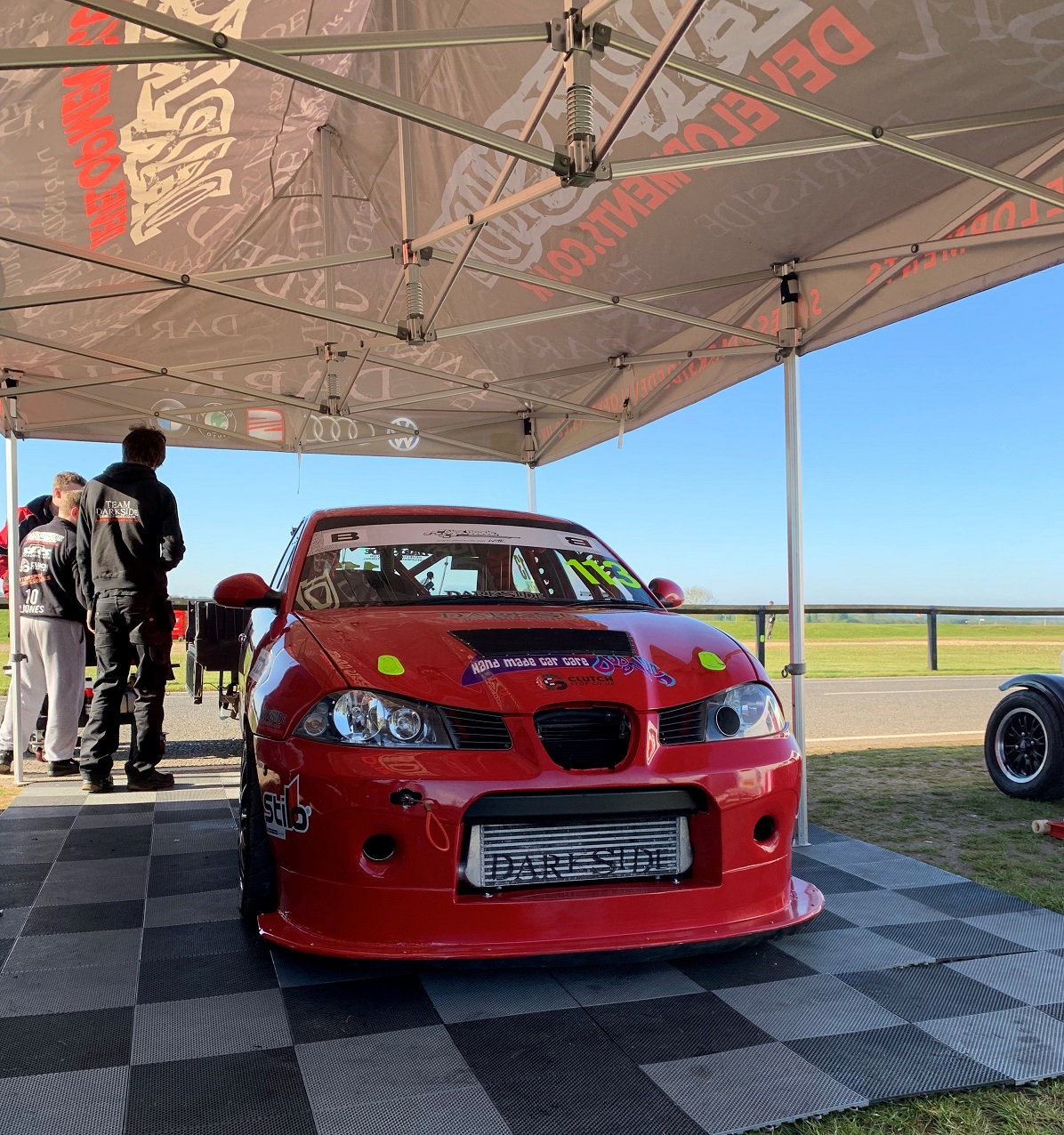 The weather was glorious, which was good since the TDC were out in the sticks, between various private cars that were getting in the way of all the vans and trucks. As you can see from the layout below, the Snetterton 300 circuit is quite long (almost 3 miles / 4778m) with 2 very long straights, a couple of hairpins and some fast corners. Coram is also an endless right hander with a 90 left into Murrays. A well set up and stable car does very well around here! 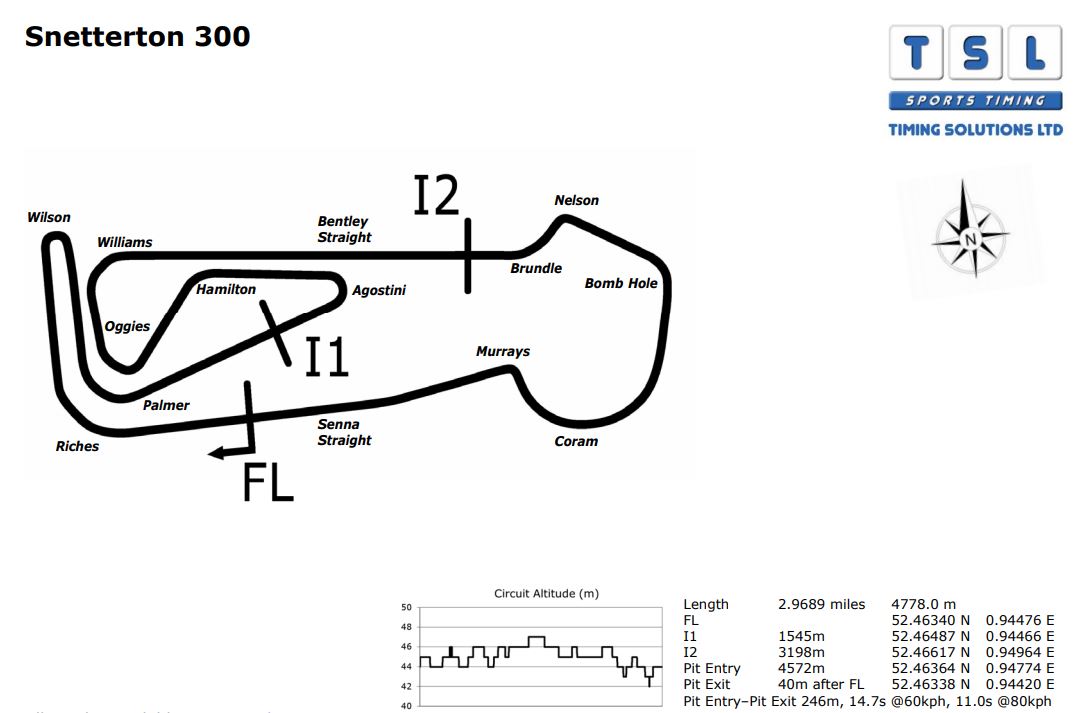 Here is a video of my Fastest Qualifying Lap - 2:18.14 which was only enough to secure P15 for the race. The car felt really bad through the corners. The front end did not seem to want to bite on turn in, which meant I did not get the rotation I am used to. Then on exit, I could not get on the power at all, I was just being pushed wide all the time. The hurt me down the straights as even the Class C cars were able to create a gap on the exit that even an extra 25bhp/ton would not close.

There was a lot of work to be done in the race! We were 4s a lap down from Pole, and 1.3s from the cars we were close to and beat at Donington. As you will notice, there were 8 Clios in front, with most of them being Cup Cars, and a lot of cars and drivers that were not at Donington. 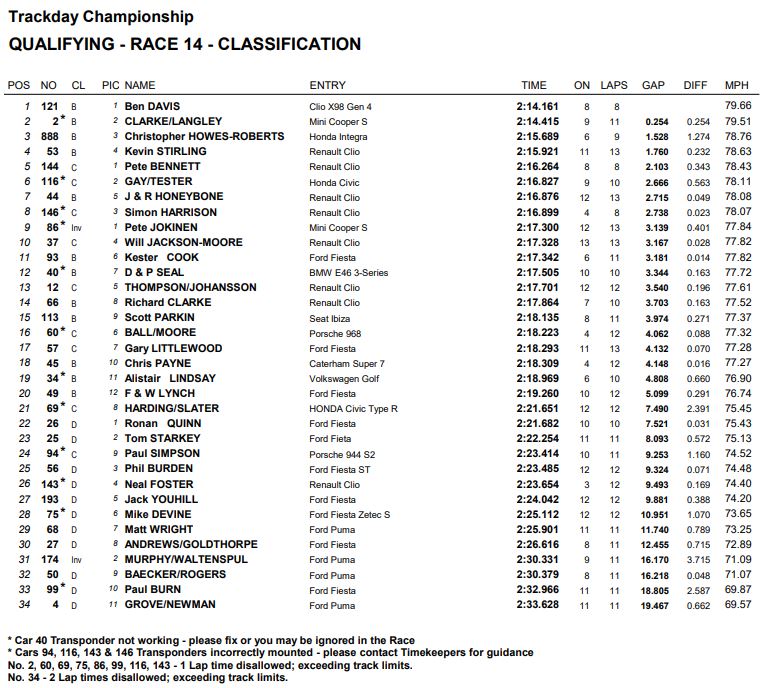 With the series requiring each driver to do a minimum of 3 laps during qualifying, I learnt from my mistake at Donington (in the gravel on the first lap!) and took it easy, came in to check everything over, then went back out to try and punch some faster times in.

Since we were well down to what we expected, a good place to look are the TSL Data sheets, which are posted online after the session. We were 10th Fastest at Intermediate 1 (between Palmer and Agostini), 11th at Intermediate 2 near the end of the Bentley Straight, and 11th fastest over the finish line on the Senna Straight. Whilst this was not great, it was a 5 places higher than we had qualified and I knew that I had not had any slipstream down the straights, which make a massive difference here. We were also closely matched to the cars we raced at Donington, so if we could find some time in the setup, we should be able to get back up into the top 10 during the race. 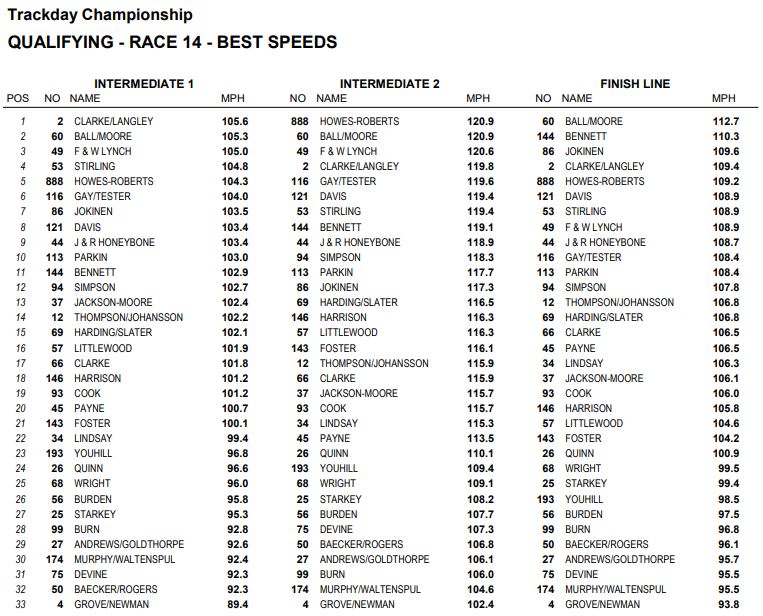 I was on row 8 of the grid, in the middle of Class B and C Cars. This is where it can get a bit cramped when 34 cars are trying to fight for the same point at the first corner! 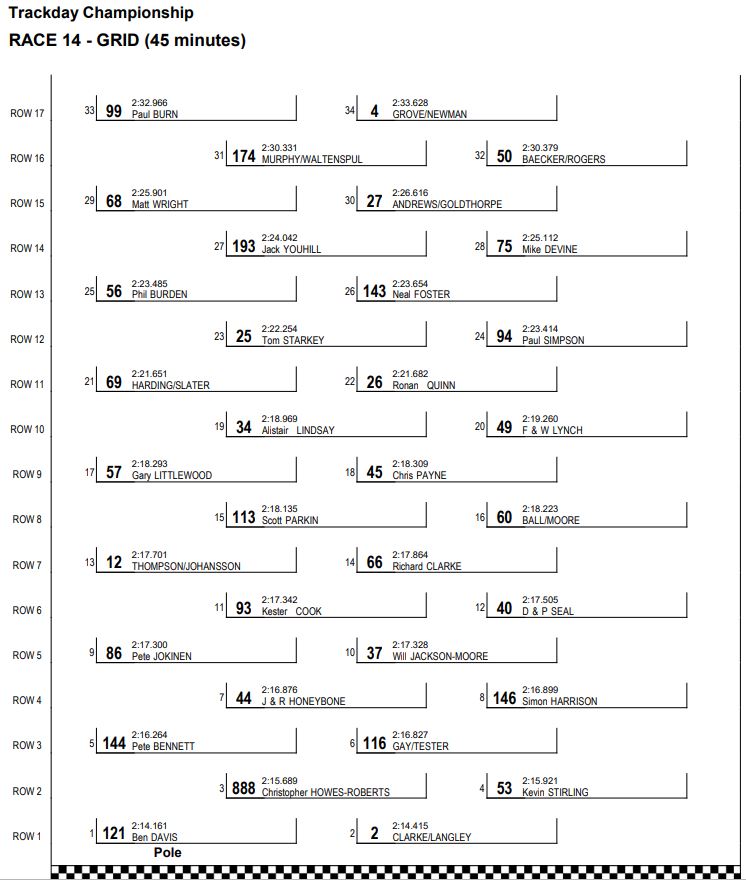 Qualifying was over at 9:30 and we had until 14:10 to get the car checked over, ready for a 14:30 start. We made a few geometry changes to try and reduce the understeer and improve turn in, but I knew what we had done would not find 4s a lap. I sat in the van with the laptop and the Racelogic VBOX HD2 data to try and find some more info to improve the lap times. The timetable was running ahead, so we were called around 15 minutes early to the Assembly Area, so there was a mad dash by everyone to get there. We were lined up on the grid as normal, did our Green Flag lap, which is an opportunity to warm the car, tyres and brakes up before lining up on the grid again to wait for the lights to go out. The videos below show the start from me, and then from the Fiesta of Kester Cook, who had a bit of a knock from a Clio, ending his race.

I got a decent start but was blocked by the slalom created by the stalled Clio of Kevin Stirling. I was up to P10 by the Bentley straight, but I had to give a place back to the Clio of ProAm Motorsport as we passed the Yellow Lights and Safety Car Board just as I made the overtake as I did not want to get a penalty.

The car still felt like it was under steering more than normal, so I could not get the power down out of the corners. After the Safety Car, I maintained 11th position until the pit stops. We are required to do a minimum 2 minute pit stop from Pit Entry to Pit Exit. I thought I had timed it quite well, but it shows a 2:06.373 so some improvements to be made there. Not the slowest, but 6s is harder to find on the track than it is in the pits! 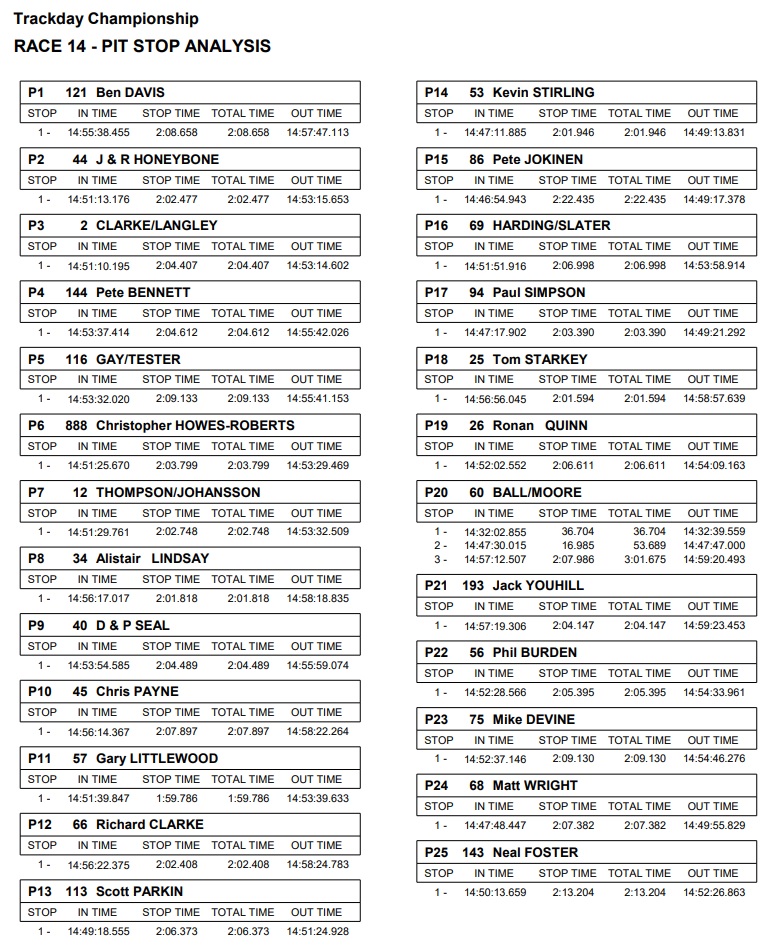 After the Pit stop, I maintained position but came out with a Clio Cup Car behind me. I managed to keep him behind until turning through Williams onto the Bentley straight, he took too much kerb on the inside and hit the tyres, sending him off the track. Next lap I ended up behind a Class C Fiesta who had just come out of the pits. It should have been an easy overtake into Wilson, but the car would not grip. I spent the next few laps battling that and some Clio Cup Cars, but I just did not have the pace in the infield to keep up. Into Brundle and Nelson, which is a very fast left and then a sharp right after the main straight, I was making up massive gaps by being braver on the brakes, but I could not get the drive out of Nelson and into Bomb Hole, with the car pushing wide whenever I went near the throttle. On lap 14 I capitalised on the Fiesta spinning at Turn 1 and made up 2 places, passing the Fiesta and the 66 Clio of Richard Clarke. I managed to keep him behind for another lap before a mistake into Turn 1 sent me onto the grass. I lost a lot of time doing this, had a lot of dirt and gravel stuck in my tyres and what felt like a flat spot. The car went from feeling bad to terrible! I lost more places while I struggled to shake off all the crap that was buried in the tyres, causing more understeer and lock ups. I was also keeping an eye on my coolant temps, in case there was any damage or grass caught in the front of the car, blocking the radiator. Unfortunately the coolant temperatures were rising to unsafe levels (over 120c) so I was having to back off at points until they dropped down. This lost me even more places, with an eventual 15th place finish. Back where I started! 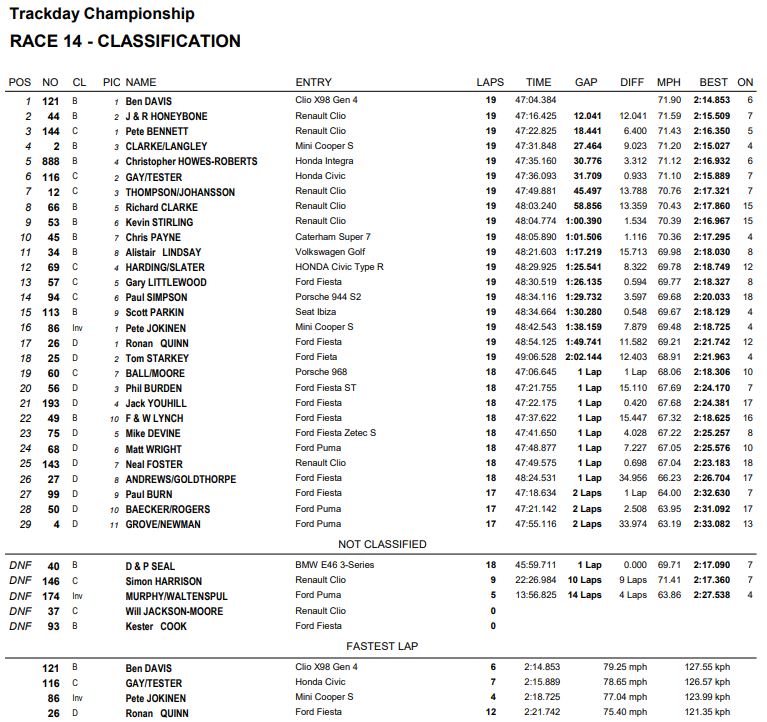 After the race we popped the bonnet and found that we had no coolant in the bottle! It took 1.5L to get it back into the bottle. Not good!

Looking at the lap times, I did most of my best sectors and faster laps when I was following other cars, which shows the benefit of a tow down the 2 long straights.

The speeds were even more interesting, with the Ibiza being 8th Fastest at I1 (between Palmer and Agostini), 5th at I2 (Bentley Straight), and 5th fastest over the finish line (Senna Straight). So the car had the pace on the straights for sure! 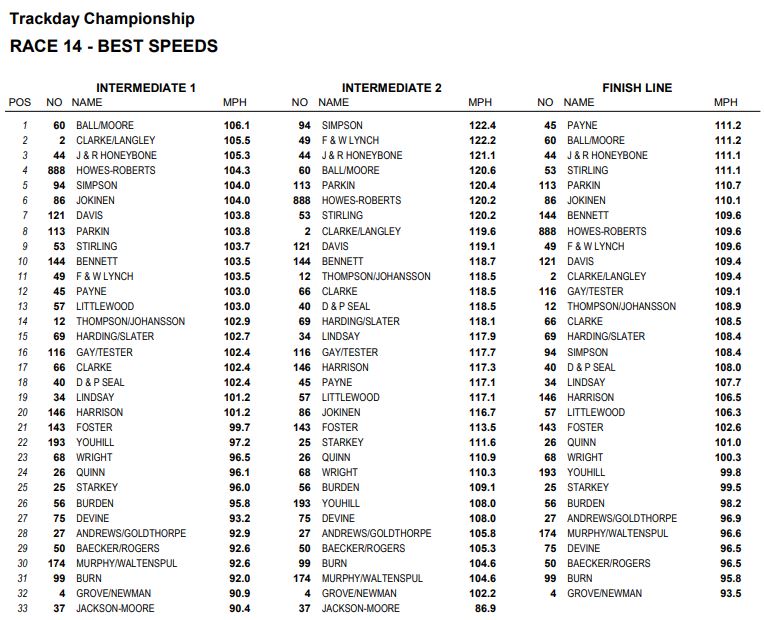 MSVR post photos from the weekend on their Gallery Page, a selection of which are below:

So overall a pretty disappointing weekend. A mixture of a lack of experience at the track and various small issues adding up to a compromised setup meant we could not complete at the front of the grid like we are used to. Further inspection of the car back at base found damage to the Radiator, resulting in a very small leak. This has then killed the head due to lack of cooling. The joys of race cars! The poor result has pushed us down to 4th in the Championship 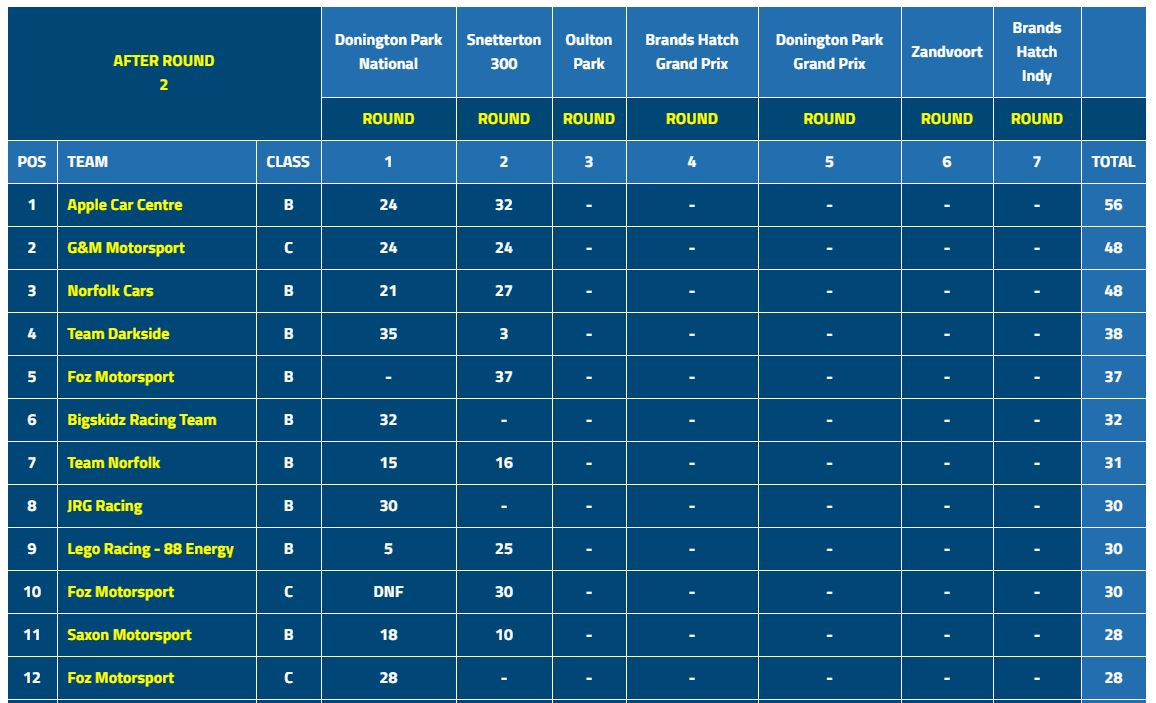 We know what we need to change ready for Round 3 at Oulton Park in July!