While we were in Zandvoort for the MSV Trackday Championship we figured it would be cost effective to do 2 races in the weekend, since we were already here and set up, and we would not be getting the ferry until Monday evening. The race on Sunday was the MSV SuperCup which has very similar rules to the TDC, but free tyre choice and more aerodynamic mods are allowed. All we had to do in the Ibiza was take 10Kg of Ballast out (Forced induction requires only 20Kg in the SuperCup). You can read about how we got on in the TDC on Saturday here. It was a shame only 6 cars decided to join this race, as whilst the grid back home is not massive, there are some great cars and close battles normally.

Conditions could not have been any different to Saturday, with some light rain in the morning, meaning the track was greasy and getting wetter for qualifying, and heavy rain forecast for the afternoon, just in time for the race! The layout of Zandvoort is below: 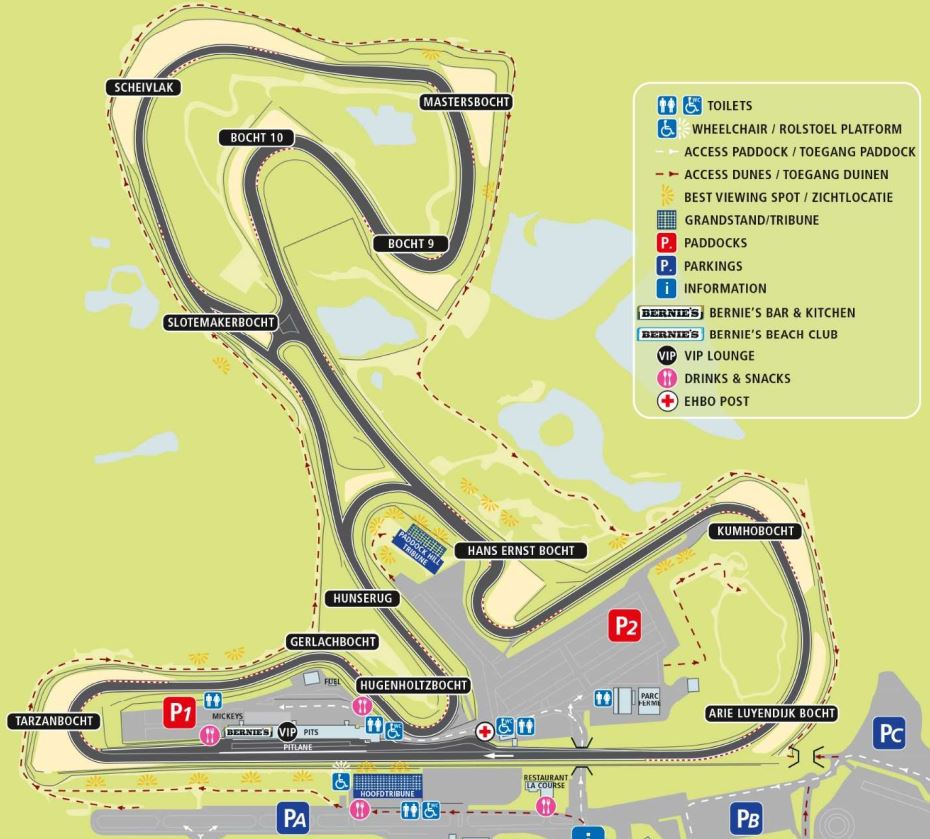 Since it was greasy, but not quite wet, we decided to go for a wet suspension setup (softer everything!) but the scrubbed in dry tyres, in this case the Nankang AR-1s. In a little drier conditions during practice on Saturday, I had done a time of 2:12.82 and found the tyres to give a lot more confidence than expected. However, with the rain starting to come down a little harder, I made the fatal mistake of not pushing hard early on, so as I got quicker, the conditions got worse. With 5 laps completed I have a 2:16.58 on the board, before pushing a little harder and having a spin into the Audi Esses while I was 1.84s up on my previous lap. I decided to give the tyres one last go, and managed a 2:15.7 before deciding enough was enough and jumping in the pits to change to the Uniroyals with around 10 minutes to go. The Honeybones had taken a gamble and Jordan went straight out on Uniroyals, so was able to push hard right away, meaning his 3rd flying lap was enough for pole, a 2:12.5, or in written words, an absolute country mile. There was no way with the track in the state it was in I would be able to knock another 3s off even with Uniroyals, but I wanted to give it a go. However it was not meant to be, as a wheel spacer issue during the wheel chnage meant I only managed a parade lap before coming back in the pits. Least it hadn't happened at the start of the race! The biggest shock for me was the fact the Seal / Hodges had managed to do a 2:14.223 on R888Rs, a mental time for the conditions. I did not envy them doing the race on those tyres (I believe they did not bring any other tyres to the meeting).

So this put us P3 overall and P3 in class, as the two Class S Cars looked to have a shocker. I know for sure Steve Gales was on Dunlop Direzzas, definately the wrong tyre for these conditions!

You can see that Lap 6 was going to be a decent one before I spun, and Lap 7 I still did not get close to the time I did in sector 1, almost 0.5s difference. If it was any consolation, I still would have been P3 regardless. The VBOX only showed a 2:14.5 for an ideal time as well.

I was slower than the Leon in P4 in sectors 1 and 3, but he seemed to have struggled in the twisty sector 2.

This time I was on Row 2 and the outside of turn 1. I was just visualising a decent start and driving between the Clio and BMW into 1st place. It always goes much smoother in the mind!

On to the Race - You can see after that even after just the green flag lap, I had already got a fair bit of misting on the inside of the windscreen. That mixed in with some spray into turn 1 was going to be fun! I had another reasonable start compared to Jordan in front, who seemed to count to 3 before setting off, meaning I had to immediately steer to the right. I had seen that the middle of the track was drier than the outside, so planned to go there anyway, but I had to feather the throttle as it was just about wheel spinning as soon as I went near full power. Callum Noble in the Purple M3 had a blinding start, jumping from 5th to 1st by turn 1, but as he went on the inside up the straight, the BMW of Seal / Hodges moved over to avoid him, and I backed off a little, losing precious momentum. I stuck to the middle of the track and was up to P2 just behind Callum. he was off like a rocket, and I did my best to keep up but I just didn't have the grip so he pulled a decent lead on me. Luckily the other guys behind were squabbling so I had a decent margin on them, however it can all disappear in an instant when it is as slippery as this, so I could not relax just yet! As we negotiated the rivers around turn 9 and 10, Jordan Honeybone in the Clio was right back up my chuff, and on the the pit straight Darren Goes in the Class S (50bhp per ton more) Leon went sailing (literally) past us both. I was reeling the M3 in, but every time I got pretty close, I could not see a thing down the straight because of all the spray. Jordan then seemed to drop back a little. Unbeknown to me, his engine had cooled down from 90 to 60 degrees while following in the spray, and it was causing some running issues. Eventually he jumped into the pits and they closed up some of the ducting into the engine to try and keep temperatures up. About 5 laps in the fuel light came on in the Ibiza, which is very unusual so early on. It is common for it to show with 4 or 5 laps to go as the fuel is sloshing around in the tank and the sender is all over the place. I was worried that Matt might have calculated the consumption wrong! Callum jumped in the pits but I stayed out for a bit longer as I was in a decent rhythm. I lapped Steve Gales in the Class S Leon, he was struggling on the Direzzas for sure! I came into the pits after another few laps.

The guys checked the tyre temperatures and pressures. Pressures hadn't moved and the temperature was less than 20 degrees, on a hot day with R888Rs we see over 100! For the minimum 2 minute pit stop from Pit Entry to Pit Exit, there was no analysis for this weekend, but I checked the VBOX footage and it looks like I was bang on 2:00, so a perfect stop! I came out of the pits with the Seal / Hodges E46 and Callum in the M3 just in front of me. They must have had decent stops and put in some good lap times while I was in the pits. Callum seemed to be struggling more than he had at the start of the race, and I quickly caught him up, then when he braked early at Hans Enst Bocht (the Audi Esses) I jumped down the inside. I was then on the tail of the E46 (they were on R888R tyres remember) and through Kumho Bocht and Arie Luyendijk Boch (the final two corners) he was struggling to get on the power, which made the pass down the pit straight pretty easy. At this point I knew I was in P1 in Class as Matt was sat getting wet through on the Pit Wall showing me the board and gap, which was steadily increasing despite me taking it steady, short shifting down the straights and rarely going full throttle, in an attempt to conserve fuel. With a couple of laps to go, there was a yellow flag being waved after Turn 10. Steve Gales in the Leon had gone straight on at the Audi esses, and ended up beached in the gravel right near the barrier. I expected a safety car, and with that, my gap to be completely gone! I saw this as an opportunity to take it very easy, so did not rush to catch Darren in the Leon and just cruised in 5th or 6th. We had a couple of laps behind the safety car, then with less than 2 minutes to go (and therefore 1 flying lap to go) the lights went out, and Darren was dictating the pace until the safety car line on the start / finish straight. He went for it out of the Audi Esses and just wheelspan like crazy so I closed the gap. He must have seen I was going to get the run on him into Kumho Bocht, so slammed on the brakes. Naughty! he went for it again out of Kumho Bocht and this time I was stuck to his bumper and he did it again, I had to dive to the left to avoid creating an ibiza sized crater in his bumper! He finally went on the straight and the Leon pulled away easily (expected with another 50whp/ton!). The guys behind were fighting amongst themselves, so I pulled a decent gap of around 4.5 seconds before the line, and Darren had only pulled 3.4s over the lap. So that was it, another P1 in class in the wet! Not bad to say I have no ABS, no traction control and 400ft/lbs trying to drag me off the road as soon as I go near the throttle!

The laptimes were all mainly around the 2:20 mark. Nothing special at all, but as Fangio said, 'the aim is to win the race in the slowest time possible'! I know I could have pushed much harder in places, but it was a very fine line between locking up and falling off the track, into very soggy grass or deep gravel!

If you check out everyone elses lap times, Jordan in the Clio was on a rampage, doing 2:14s after having to pit early due to the misfire issue. The safety car helped Ray when he took over, as they were around 1 minute behind everyone else until that closed up the pack. It just shows you that in the wet, you don't have to be the fastest on the track to win, and being on the right tyres at the right time is critical!

We scored 30 points for P2 overall and 4 of our class or above behind us.

The full race is shown below. No commentary from TSL this round, it was all in Dutch!

MSVR post photos from the weekend on their Gallery Page, a selection of which are below. For some reason they decided not to do any podium celebration at the end of our round, so no photos of that!

As this was our first round in the SuperCup this year, its the first points on the table for us, but that has still jumped us to 11th overall! 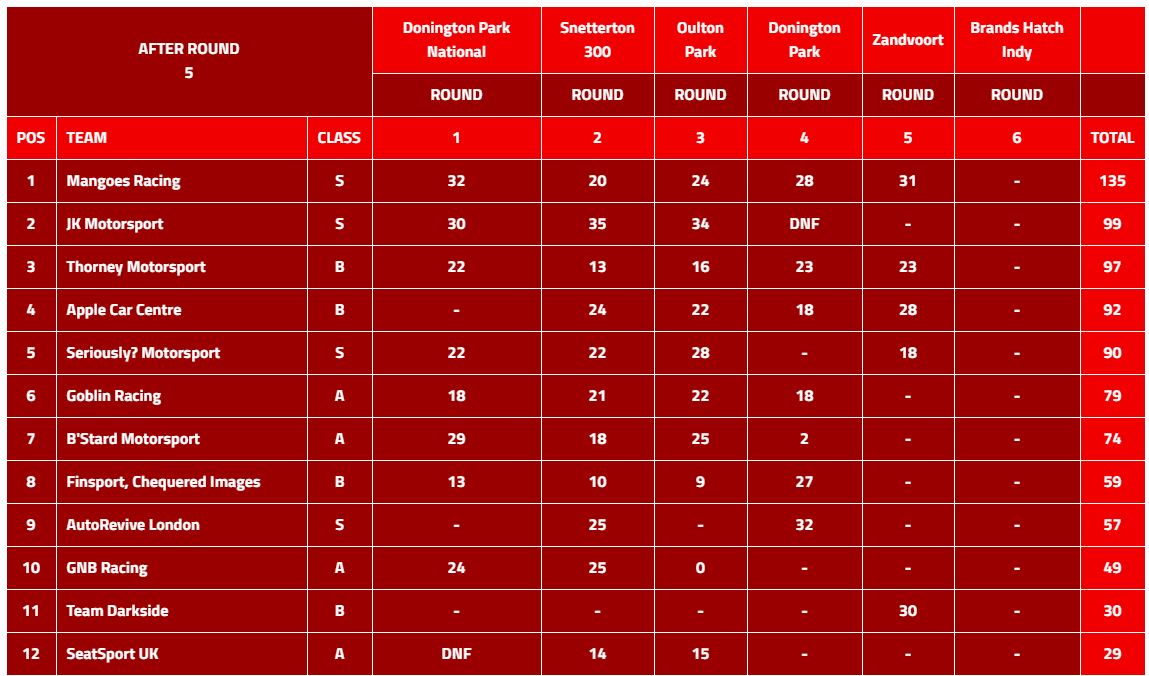 The final round will be at Brands Hatch on the Indy Circuit on Saturday 16th November. Between now and then the Ibiza is part of our Birkett Relay Team on the 26th October. At Brands the Ibiza won't be in the SuperCup, we plan to run the Leon SuperCopa / BTCC / WTCC Project if all goes well at Silverstone!