Round 4 was supposed to be on the Silverstone National Circuit, but with the resurfacing before the British F1 and Moto GP rounds, it was moved to Brands Hatch, on the GP Circuit that is rarely used these days due to noise complaints (a sad but true fact about a lot of great UK tracks). Last year this round was combined with the Class S and A Cars (which now make up the MSV SuperCup), we qualified 6th in class and finished 5th, with some great battles, with only 1.4s separating me from 3rd place! You can read about it here.

Below is the layout of the Brands Hatch GP Circuit, which is the same as they use in the BTCC, and as it was when the F1 circus visited here in the 80s: 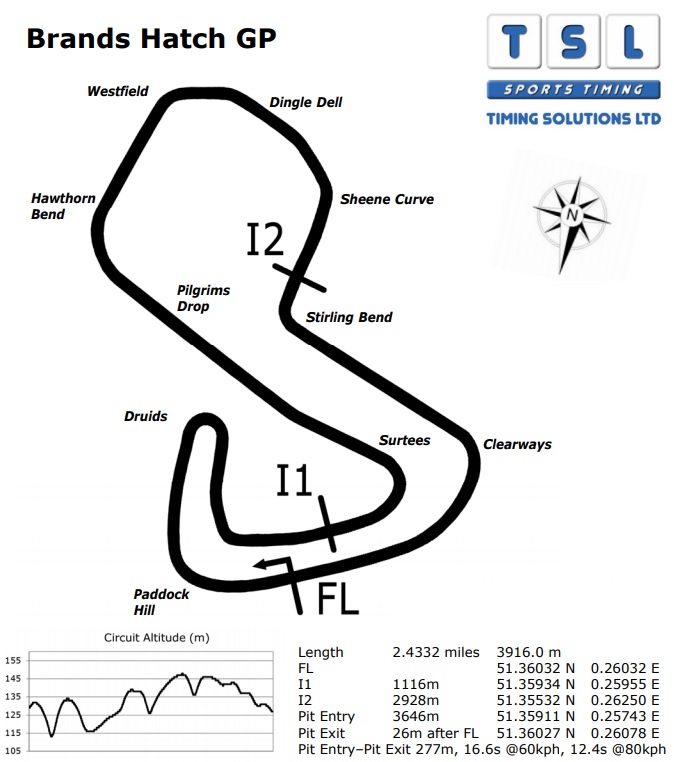 We had done a track day here with Javelin Trackdays on the 22nd July to get our setup right. We were around 1s off our aim, with the best laptime being a 1:48.5, when we were looking for low 1:47s. We were hoping everyone else had slowed down since last year!

We made some changes to the car before we brought it, and it did seem to make a bit of a difference, but we were still struggling for grip on turn in, which then affects the whole corner. We will figure it out at some point! I put in a few reasonable laps, the best being a 1:48.239, which at that point was 2nd fastest. The 888 Integra of Howes-Roberts ended up in the gravel at Surtees, which brought out the safety car. I was hoping it stayed out for the rest of the session! 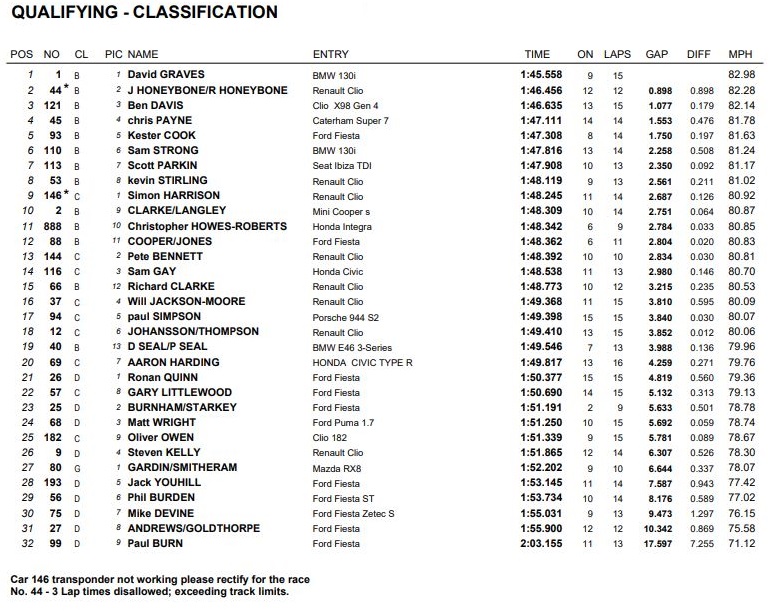 Kester Cook in the 93 Fiesta, who beat us at Silverstone was 0.6s ahead in 5th. The Caterham of Chris Payne was a little further ahead, then the 2 Clios of Ben Davis and the Honeybone's. The other 130i of David Graves was way ahead with a 1:45.558, over 2.3s quicker than me! A standard 130i is more than the regulation 175bhp/ton we can run for Class B, so hopefully they added a lot of weight or reduced the power!

The car was pretty consistent in the low 1:48s, but that was too slow! We were 6th quickest in sector 1, 7th in sector 2 but then only 9th in sector 3! So we were losing a fair bit of time through Clearways. 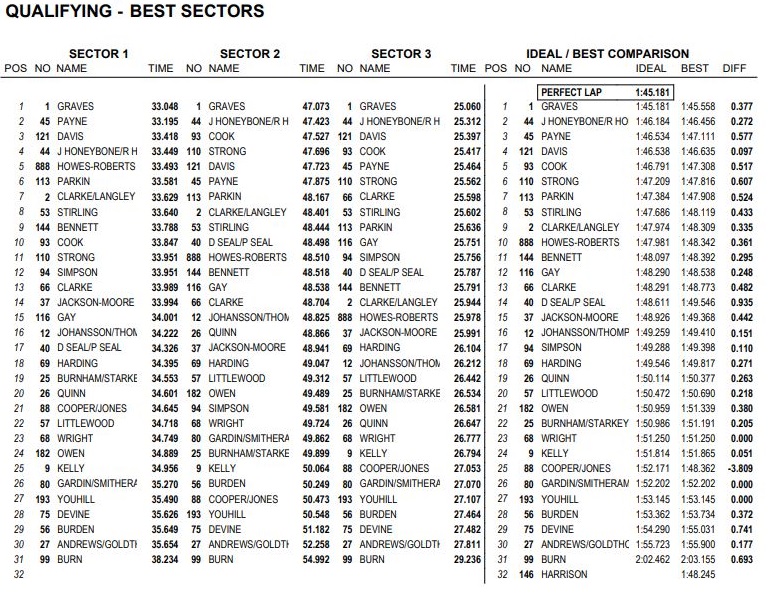 I was on row 4 of the grid, just behind Kester Cook. I decided to point the car slightly towards the middle of the track, as he has stalled a couple of times on the grid with his sequential box not being the best at getting off the line! 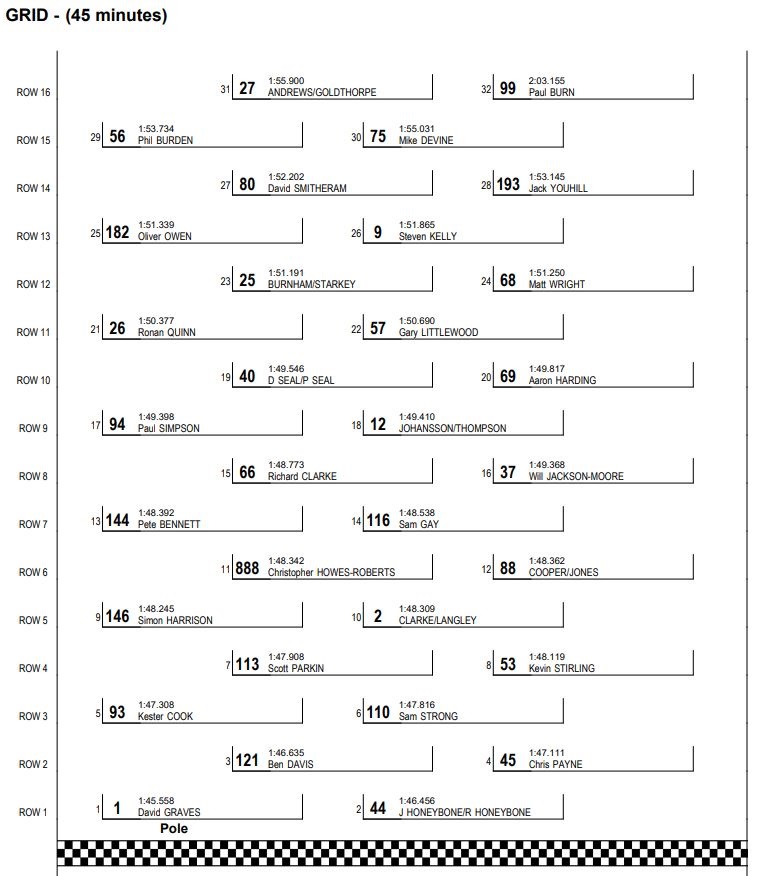 I decided to get the Racelogic VBOX HD2 data and search hard for more time!

On to the Race - I had another good start, jumping Kester around the outside of Paddock Hill, even though I missed 2nd to 3rd. Into Druids I was right behind Sam Strong in the 130i. As he braked heavily on the inside line, I came off the brakes and went around the outside. The tyres had not quite come up to temperature so I under steered more than expected, losing a bit of ground. Into Surtees, Sam went wide so I dove down the inside and in front up the hill. As we went down Pilgrims Drop, Sam had pulled back alongside, but I still had the inside line into Hawthorn Bend. For some reason, he tried to cut in front towards the apex, leaving me nowhere to go. Our wheels banged and he went flying off he track, narrowly missing the barrier. As we turned through Westfield, the Yellow Lights and Safety Car boards were shown. Something bad had happened but I knew it was not the 130i as he rejoined the track a few cars back! The safety car came back in on lap 6 and we were off. The Clios in front got the jump on me around Clearways where the car had struggled all day. Kester was right on my tail, and down the straight before Hawthorne he was side by side, but again I had the inside line. He thought better of going around the outside, and instead concentrated on the exit, which worked great for him as he pulled around me and had the better line into Westfield. I had some great battles with Kester as he was been held up by Ray Honeybone in the Clio, before we both got round the Clio after Hawthorne on lap 8. By this time the pit window was open, and Honeybone took an early dive into the pits to swap with Jordan, who is the faster of the two. I decided to stay out until closer to the end of the pit window, as I had clear air in front of me. That worked quite well as I put in my fastest 3 laps of the race during this time. With around 5 minutes to go, I dove in the pit entry. 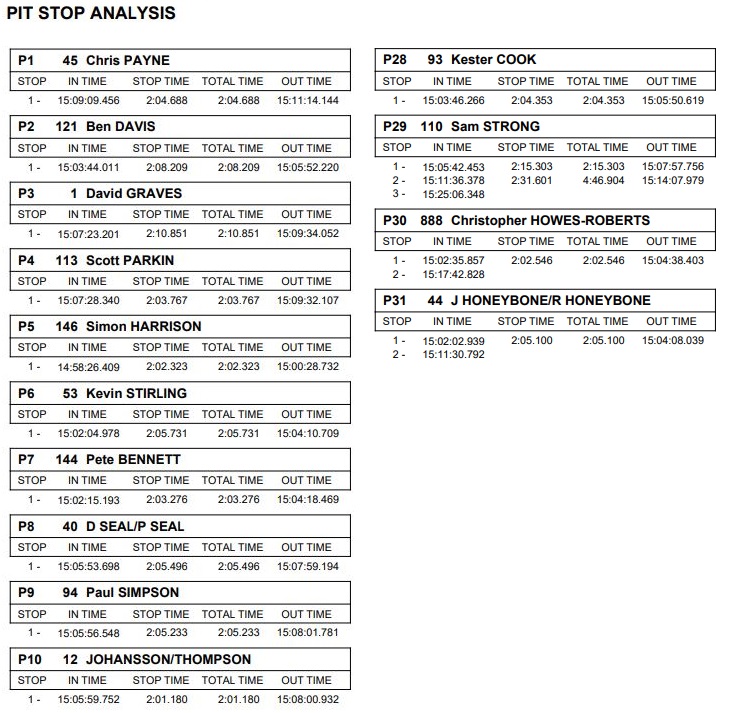 We are required to do a minimum 2 minute pit stop from Pit Entry to Pit Exit. At Oulton we did a 2:02.26, leaving a bit on the table. As I sat there watching my timer count down, I saw in my mirror the current race leader, Chris Payne in the Caterham driving up the pitlane, and his team were just in front of me. I had to go early to ensure he did not hold me up by too long. I then drove a little too slowly so missed my mark as the timer hit 0:00. This meant I ended up doing a 2:03.767. We still need to work on this for sure! Luckily it was still a fair bit quicker than most of the guys around me, so I did not lose much time on track.

As I exited the pits, Jordan in the Clio came past. He had put in two very good outlaps (their best of the race) to jump back in front. However, as we went around Paddock Hill Bend and into Druids, it seemed to be going very slowly. As we brakes for Druids, he slowed massively so I had to jump around the outside. As I did I heard the car was misfiring badly, so I knew their race was done. A shame really as we would have had some decent battles. I had jumped David Graves in the BMW 130i in the pits as he had a very slow stop (2:10.851) but the straightline speed of it meant I could not hold it off, so he quickly went past me on the way towards Hawthorne. From there it was a bit of a lonely race really in 5th position, with a decent gap to 4th and 6th. I just go my head down and tried to keep it on the track. I knew that with the Honeybones out, at the time my closest rivals in the championship, a decent amount of points would put me well ahead of them. As I crossed the Start-Finish line on lap 23, I noticed Kester Cook, who at the time was the race leader, had pulled into the service road before Paddock Hill. His race had been going so well! This put me up to 4th, where I stayed until the end of the race. 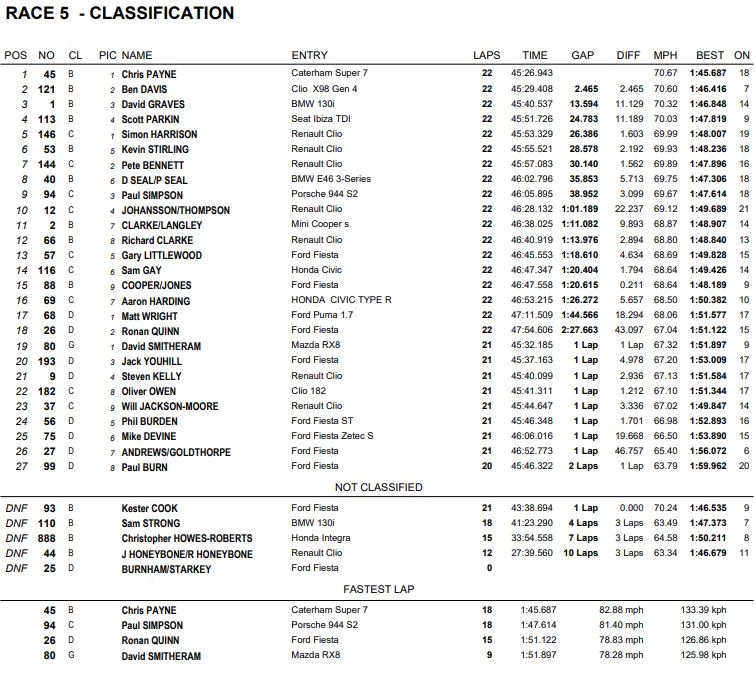 As you can see from below, the 3 quickest laps were just before I pitted, whilst in clear air. The car seemed to struggle a lot more after the pit stop, so we need to look at our data to figure out why and make improvements. 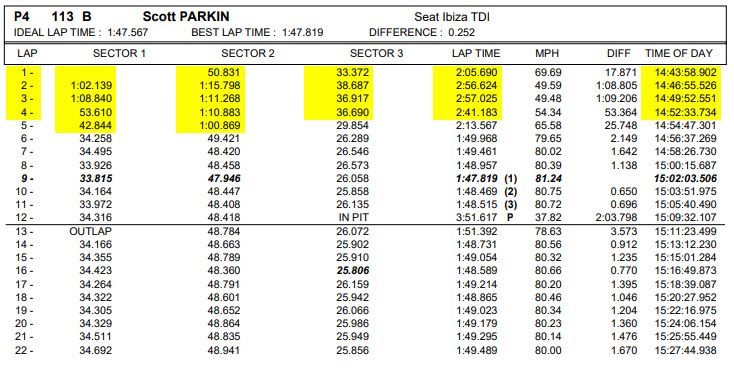 Analysing the sector data from the race, we had gone backwards again with the car between qualifying and the race, being only 8th fastest in sector 1, 10th in sector 2 and 11th in sector 3, our ideal time being 9th overall. 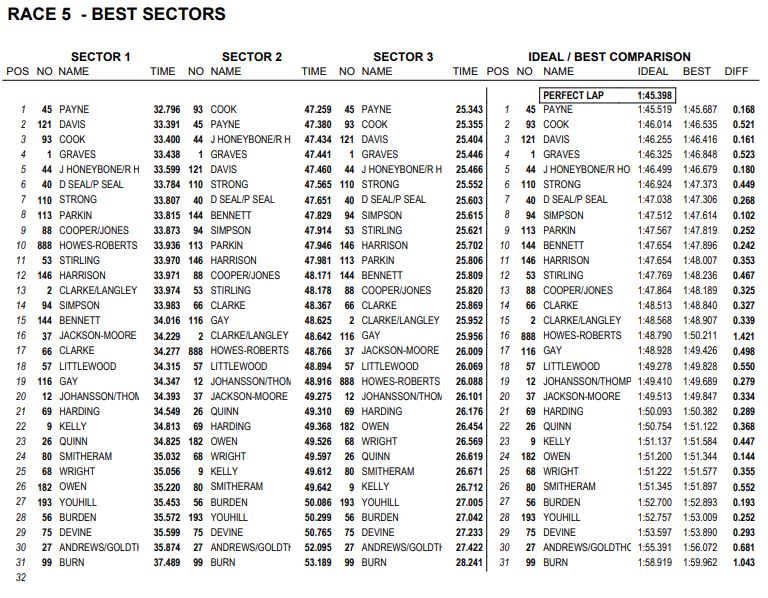 I scored 27 points for coming 4th overall (22 points + 1 point will be awarded for each competitor beaten in class up to an additional 5 points, as per the regs).

MSVR post photos from the weekend on their Gallery Page, a selection of which are below. No podium photos this time, I will try harder next time!

With the results, I am now on 92 points and leading the championship again, which I haven't done since R1 at Donington! Harrison had a DNF at Snetterton and Davis missed Donington, so Harrison would be matching me and David only a point behind with the dropped scores, as my worst score is 3 points from a terrible Snetterton! 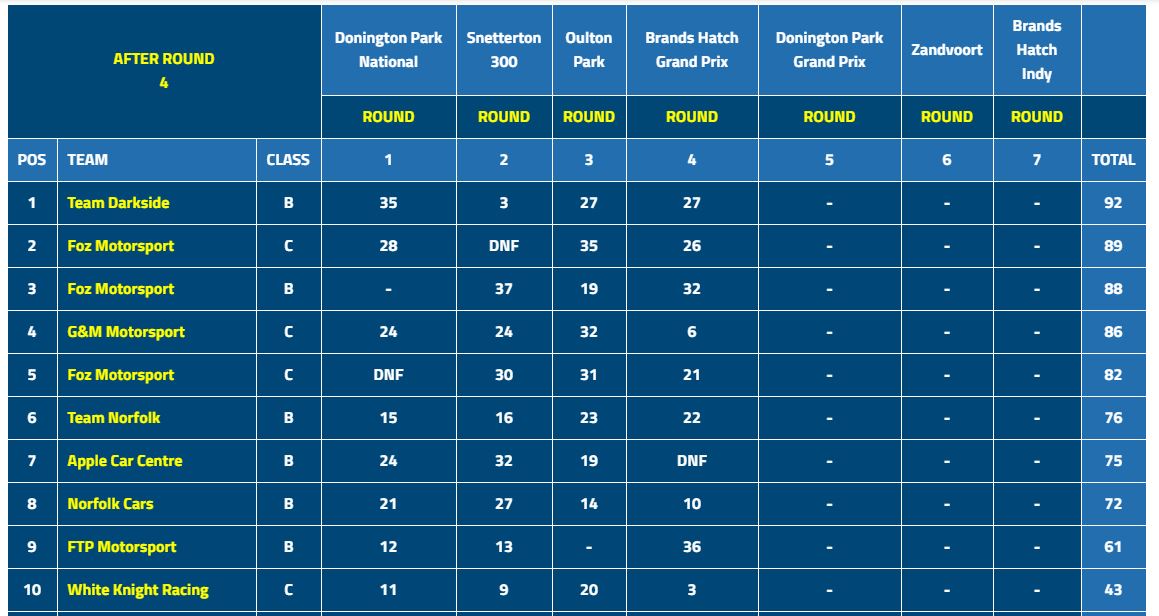 So with 3 rounds to go, it is still all the play for! Next stop is Donington, one of my favourite tracks, but this time on the GP Circuit, which I have only done on a trackday once. Lets see how the Melbourne Loop mixes things up! With the round after that being Zandvoort, recently added to the F1 Calendar for 2020, that means we will have done four F1 GP Tracks in a row (Silverstone, Brands Hatch, Donington and Zandvoort)!