Round 2 of the MSV Trackday Championship, took us to Snetterton, a weekend we would rather forget. You can read about it here. With all the issues sorted, we decided to take the car for a shakedown at Oulton Park on the 2nd July, in preparation for the race there on the 27th July. I managed a 1:59.76 lap, which would have put us close to the front, based on the 2018 lap times.

There was supposed to be a test day on the Friday before the race, but this was switched to a regular open pit lane trackday. Good in terms of track time. A bit of a nightmare in terms of clean laps. The trackday overtaking rules are there for safety rather than lap times, which means we would have less of an indication of pace over each stint as we would encounter traffic.

The weather was decent on Friday, but was forecast to rain Saturday. This meant we did not learn much about the car setup ready for the race. What we did learn is that the car, for some unknown reason, was nowhere near the previous pace. After fixing a lot of little niggles, we still only ended up with a 2:04.04, almost 5 seconds off our previous pace. We were praying for rain to mix things up. With that in mind, we went for a full wet setup on the car.

Below is the layout of Oulton Park: 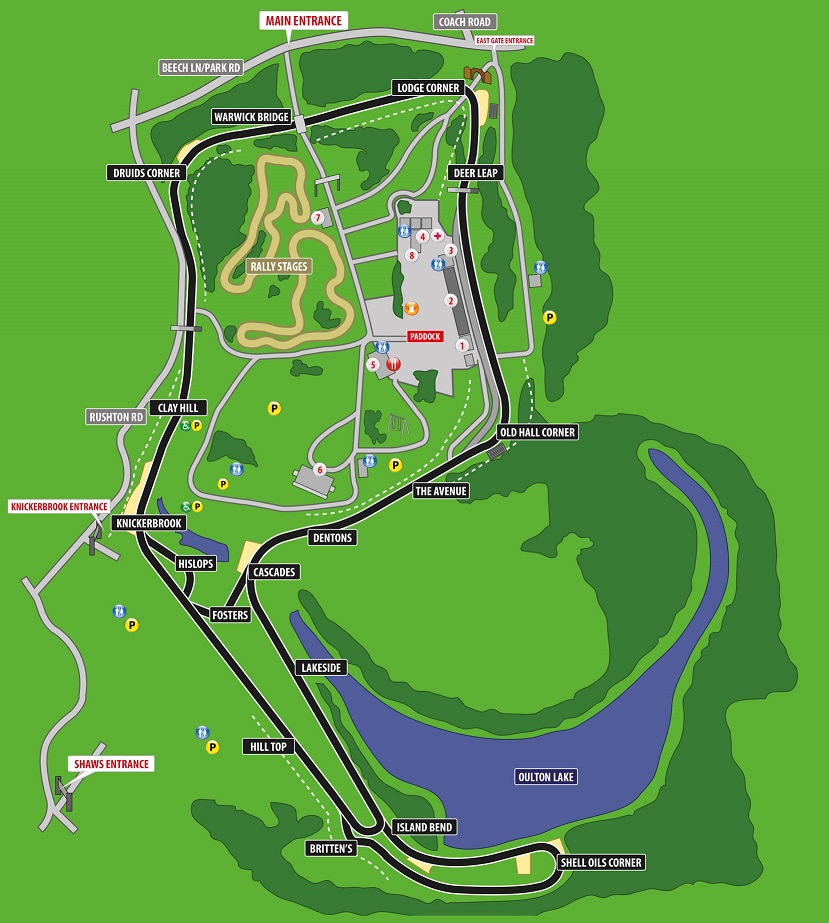 Saturday came, and the rain gods listened to us, as it was pretty wet already by 8am, and only looking worse. We lined up from around 8:10 ready for qualifying at 8:30. 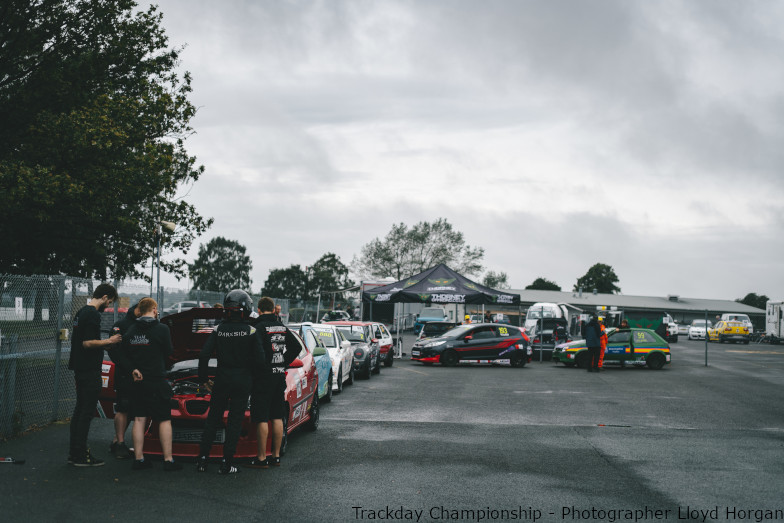 Qualifying seemed to be going well, with me improving with each flying lap, but then the No 44 Clio of Ray Honeybone went straight on at Old Hall, kissing the tyre wall. This brought out the red flag, and we all waited in the pit lane in the hope that we could get back out. At this point I was P4 with 2 Clio Cup Cars and Kester Cook in the Fiesta in front of me, so really it would have been in my favour for the session to be stopped.

However the track reopened with 10 minutes on the clock, and I ended up behind Jordan Honeybone in the Clio, who was making it hard work to get round him, despite him still trying to find where the grip was! This meant I could not get a clean lap in, sending me down the order into 9th. 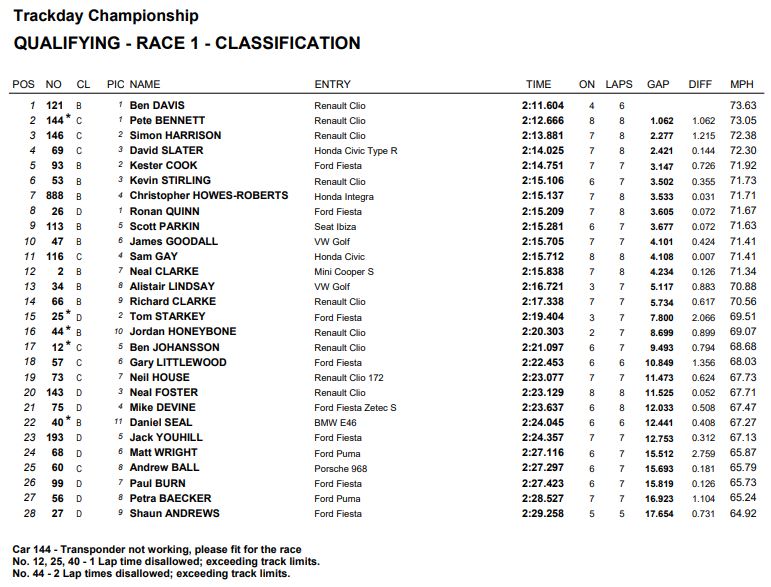 What was more impressive was the number of Class C cars above all the Class Bs, and even Ronan Quinn in the No 26 Fiesta in Class D pipping me by 0.08s. It just shows how the rain can equalise any power advantage. As you can see from the Analysis below, the best time I did was ~0.5s off Kester Cook in 5th, but then the other guys were in another league, especially considering all but Ben Davis were in Class C! 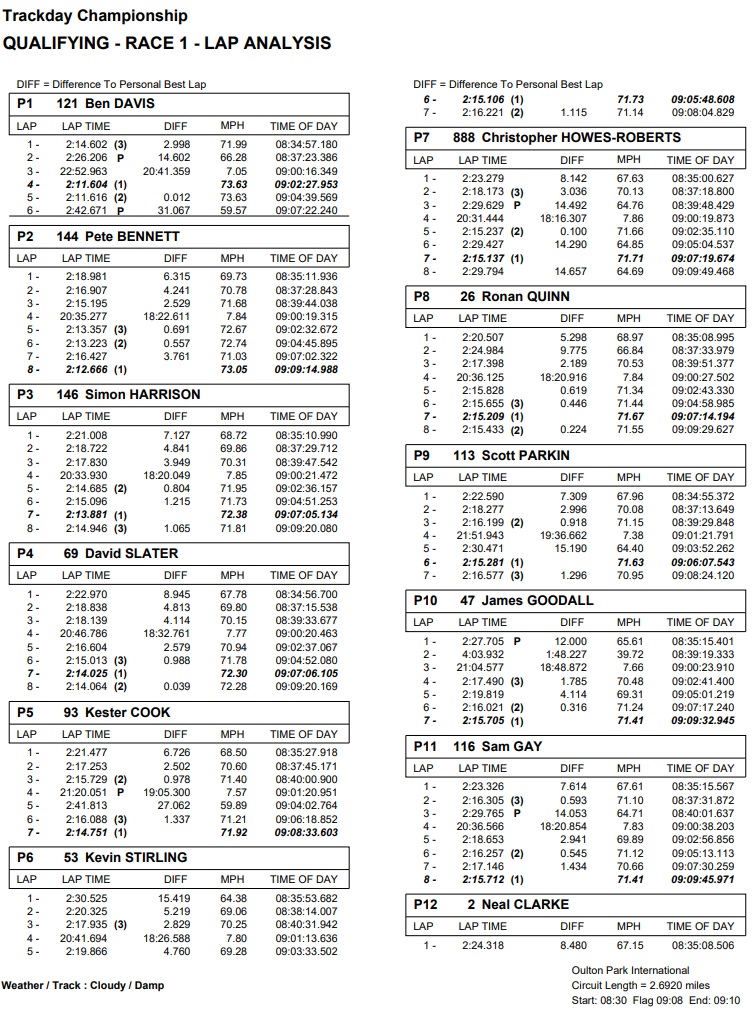 Again, I had some work to do in the race! We were not sure if I could use the diesel torque to my advantage off the line in the wet, but I would give it a good go! 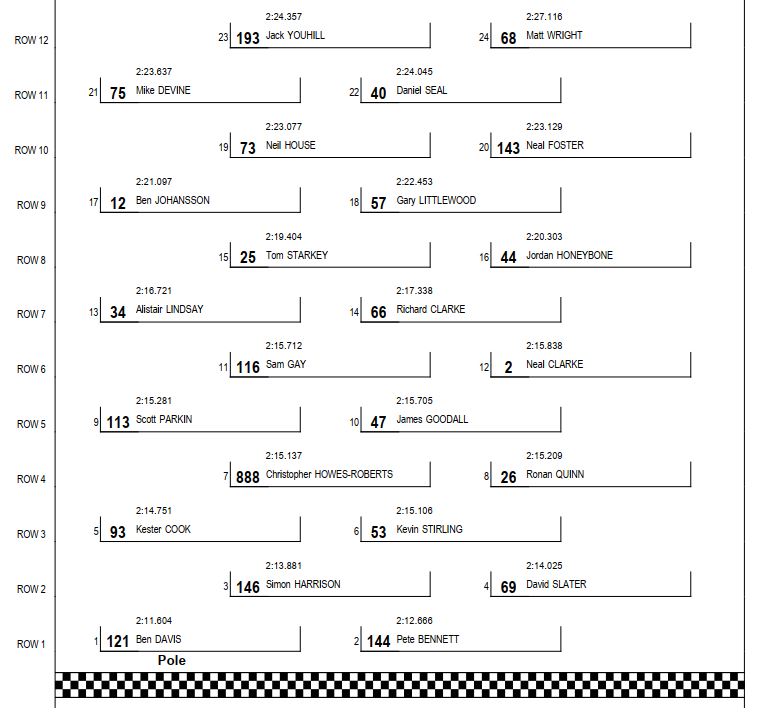 Again I cracked out the Racelogic VBOX HD2 data to try and find some better wet lines, then at 11:30 we were all gridded up to do the Green Flag lap and see just how much grip was out there. The answer was a lot less than Qualifying, since it had rained solid since then!

I made a great start in comparison to most of the guys in front, jumping from 9th to 5th by the first corner, and just avoiding being pushing into the wall by a Clio to the left, and being taken out by a Clio in front doing some aggressive defending just as we entered Old Hall. The Clio defending hard again into Island Bend, then I had the run out of Shell Oils Corner into Britten's, but he defended well. Over the Hill Top and into Hislops, I ended up on the racing line at the side of the Clio, but that is exactly where none of the grip is in the wet, so ended up going straight on! As not to get a penalty for leaving the track and gaining an advantage, I let the Clio through (who under-steered close to me as he was going into Kickerbrook) but this also let the Civic through. I kept with them up Clay Hill and through Druids, but stupidly stuck to the racing line in the braking zone at Lodge! Another slide put me into the gravel, so I knocked it into 1st gear while I was still skimming the top, hit the throttle hard and prayed I would not get stuck! Luckily I kept it going, up Deer Leap and over the Start Finish line, I had dropped back to 12th. So much for that great start! I managed to pick through some of the pack, ending up back to 10th on the next lap, then 9th the lap after. 10 minutes in we were behind the Safety Car after a Clio was stranded just on the exit of Old Hall.

The Safety car went back in just before the Pit window opened, and some chose to jump in the pits right away. However, with 24 minutes left on the clock, the Safety Car was out again after the Mk2 Golf smashed into the barrier at Cascades, with the board being show when I was near the Britten's Chicane. I seized the opportunity and went as fast as I dared round the lap and into this pits. 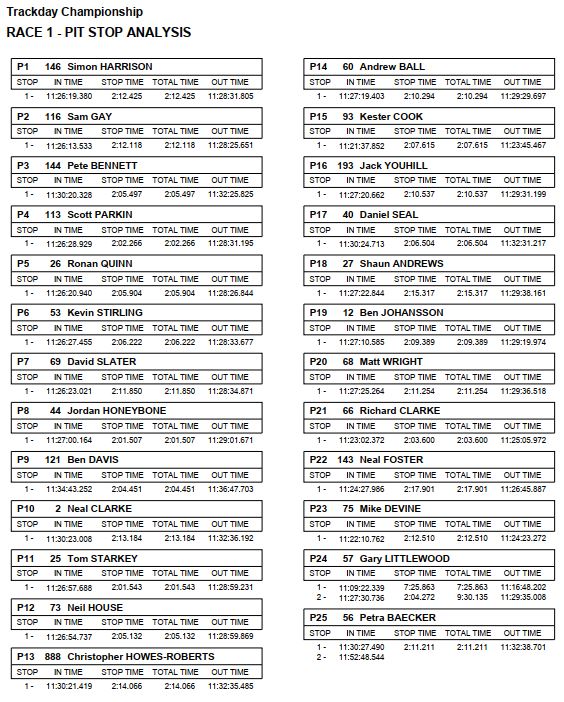 The 2 leading Clios of Ben Davis and Pete Bennett stayed out, and everyone just behind them dove into the pits for what is a cheap pitstop, since everyone else is going much slower on track.

We are required to do a minimum 2 minute pit stop from Pit Entry to Pit Exit. After the 2:06.373 at Snetterton, I purchased a new Timer and mounted it in the middle of the steering wheel. This helped massively as we registered 2:02.26, which was the 3rd quickest of the race. Still room for improvement!

This well timed stop worked out great. After catching the crocodile and the safety car let the 'lapped' cars round, I was in 3rd position, just behind the Honda Civic of Colin Tester and Sam Gay, then the Fiesta of Ronan Quinn. I managed to pass Ronan just as we crossed the Safety Car line at the restart, then kept with Sam in the Civic while Simon Harrison in another of the Clios was lingering in my mirrors. I had so much grip coming out of the corners, and could close the gap on Sam coming out of the corners, and increase it on Simon behind, but under braking it was so difficult with no ABS. Eventually I locked up into Hislops again and let Simon through, he came through Kickerbrook sideways and managed to hold it as I rejoined the track! Onto the last lap, I had the Civic of David Slater right behind me, his car seeming stronger on the brakes. We came up to a Class D Fiesta that had been shown multiple Blue Flags as we came out of the chicane. I was flashing my lights hoping he would stay out of our way, but he didn't and David snuck through on the inside at the 2nd chicane. The time lost behind the Fiesta pushed me back towards Pete Bennett in the green Clio, who made a late move into Lodge, touching the grass on the inside. If he wanted it that much, he could have the place! 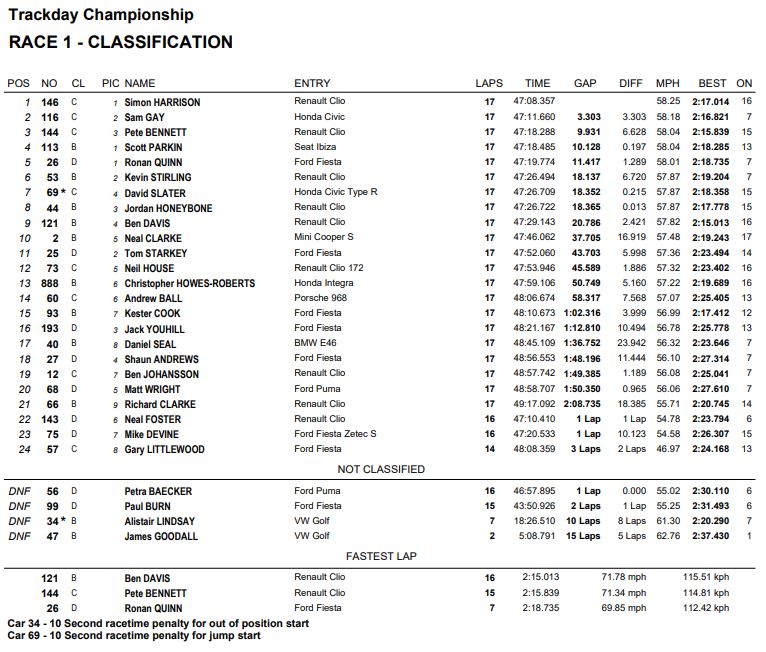 Looking back at the footage, everything I have been taught about wet lines went out of the window during the race. I need to keep a cooler head next time! The Clio Cup cars are going to take some beating, most of them have sequential boxes, Motorsport ABS, traction control and a much better chassis than we are working with, but we will put up a good fight! 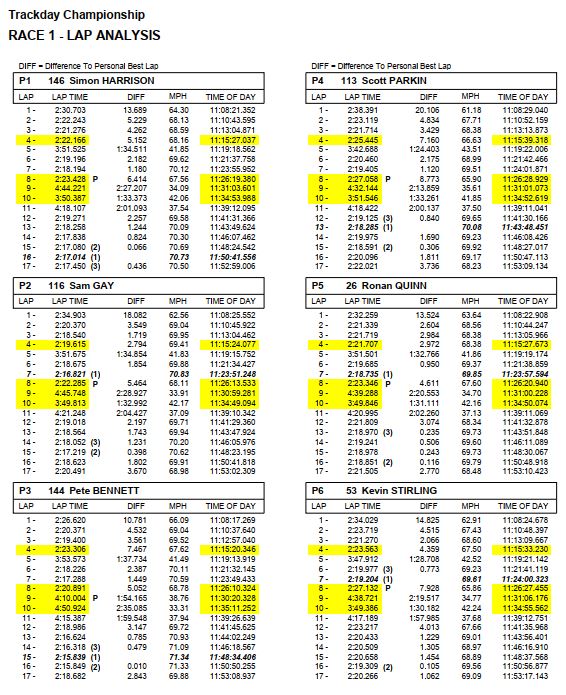 Even though I ended up 5th on the track, one of the cars ahead of me, the Civic of David Slater had received a penalty, which put me back to 4th, and 1st overall in class!

MSVR post photos from the weekend on their Gallery Page, a selection of which are below. I was on the Podium by myself as 2nd and 3rd Place were nowhere to be seen! I was not in a Class of 1 like some championships!

That result has brought us back to 2nd in the Championship for Class B, still 10 points behind the Apple Car Center Clio, but with 4 more rounds to go, anything can happen! 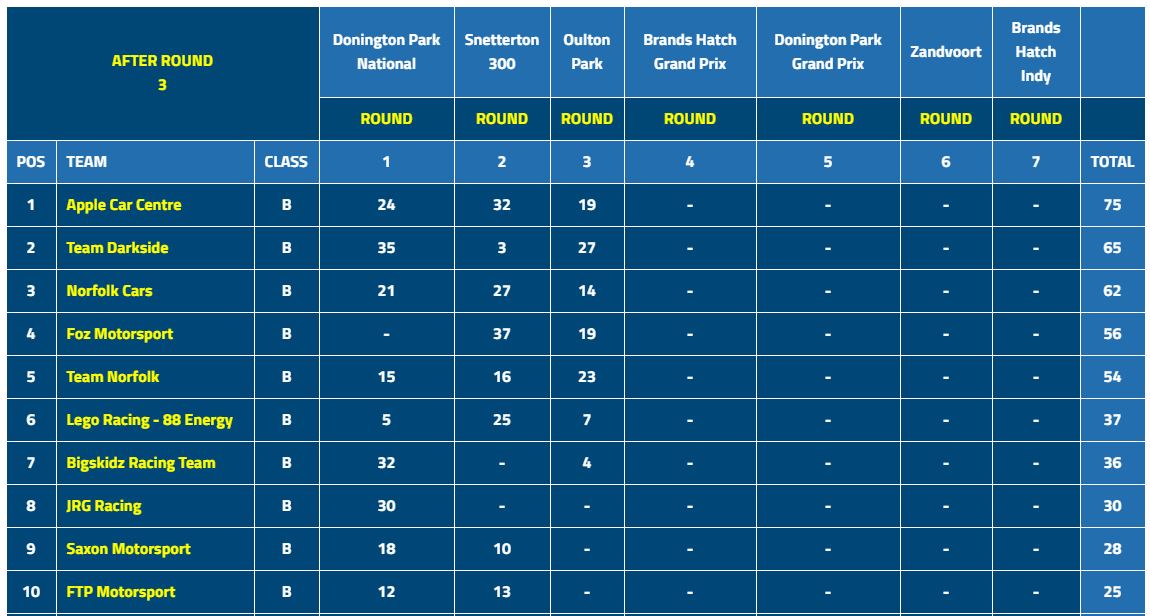