The next round of the SuperCup, took us all the way down South to Brands Hatch, on the short Indy Circuit.
With a busy schedule outside of racing, we were not able to do any testing before the race, which wouldn't have been much of a problem had we not being having the usual Golf nightmares!
The DSG box started causing issues on Wednesday night, sticking in gears. We figured it was a wiring or solenoid issue, both of which we had lost interest in trying to diagnose after countless hours trying to get the software right. So we decided to refit the 02Q 6 Speed Manual box that had been in the car before the conversion and was stripped down to check the condition.
Paul did the job in record time, only for the Concentric Slave Cylinder (CSC) to burst when he tried to bleed it!
Box off again, new CSC fitted and all together, the car was on the dyno to verify the power was still within the class limit (as the DSG saps more power than the Manual. Everything was good until the clutch decided to start slipping, and would not stop!
Box off for the 3rd time in less than 24 hours, a new clutch kit was installed and bedded in and the car loaded up ready for the 3.5hr journey on Friday afternoon!

Below is the layout of the Brands Hatch Indy Circuit. With dry lap times at less than a minute, the laps soon add up! 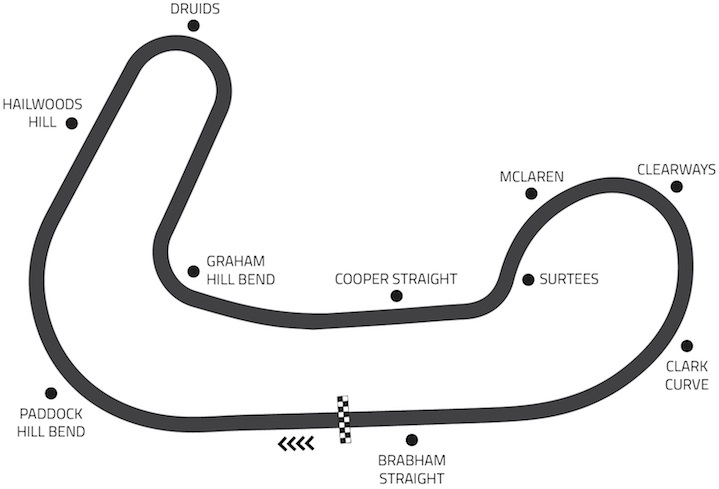 Even though there would only be 19 cars on track, I knew that the short Indy Circuit soon gets full so figured I needed to push hard straight away to get a few decent laps in. The first flier was a 54.291, followed by a 54.221 which I thought was pretty decent to say I had not been to Brands since February! The next lap was a 53.608, which ended up being the quickest of the day for me for several reasons... 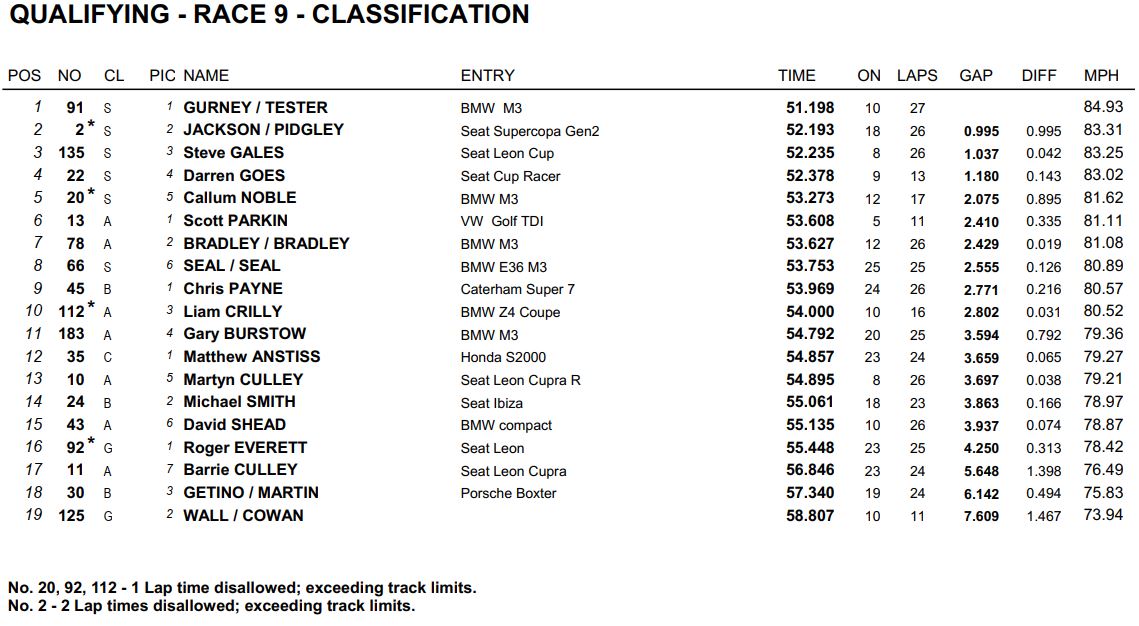 A few of the guys in the paddock, racing in other series, had mentioned that they were struggling to get their tyres up to temperature and pressure, so we had left our starting cold pressure pretty high, which is what allowed me to push hard straight away. Sensing that the pressures would have come up a bit too much, I pitted to give the car a full check over. As I was coming into the pits, the clutch pedal started to feel weird and I could not get it out of gear.
The guys quickly bled the slave, and a bit of air came out and the pedal felt OK again, so I went back out. While I had been sat waiting, someone had dropped a nice trail of oil into Druids, catching Callum Noble in the purple M3 by surprise, so he took a trip into the gravel. The track looked more like a kitty litter tray, and there was no chance of an improvement in the times. A few corners in, the clutch pedal felt strange again, I pitted to check over it again. We bled the slave again, but nothing came out and the pedal still was weird. Looks like the box was coming off for a 4th time! 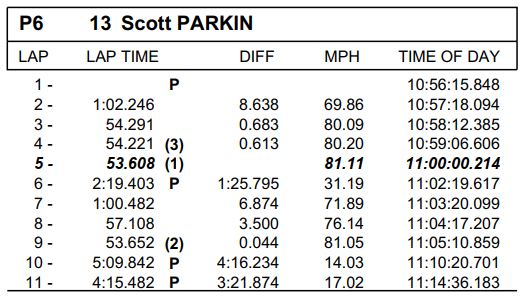 1st in Class was P6 overall this time, with five of the Class S Cars (240whp/ton vs our 200whp/ton) in front of us, and a couple behind. This time I had a Class A car close behind, with a gap of only 0.019. Michael in the Ibiza managed to get P14 overall and P2 in Class B. It was a shame that only three cars entered Class B this round for him to have some battles with.

It was going to be an interesting start with five RWD cars behind me on the grid! Luckily I was on the left side of the grid, the right is much more cambered and you end up sliding sideways if you wheel spin! 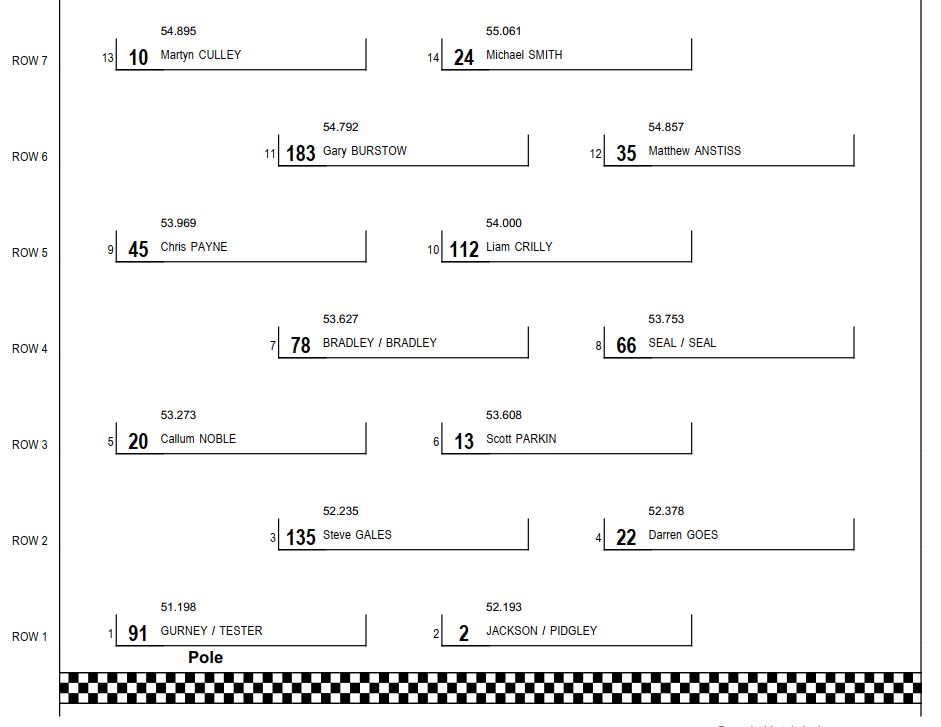 I got off to a good start in relation to the guys in front, Callum in the Purple M3 got a blinding start, as did Chris Payne in the Pink Caterham from behind. He was right along side as we dropped into Paddock Hill Bend. I had managed to jump Steve Gales in the Class S Leon EuroCup as he bogged off the line, but didn't expect him to stay behind me for long with 40whp/ton more!
Nick Jackson in the Red and White Leon SuperCopa did some nice rallycross driving around Clearways, so I backed off in case he shot back onto the track, which gave Gales behind a better run on me over the line.
Even after one lap, I had built a decent lead on the Class A guys behind, helped by the Class S guys pulling me around. I had pulled a 1.4s lead while they all battled with each other.
The Class S cars were starting to creep away, but I was still increasing the gap on the guys behind. After lap two, it was up to 2s.
On Lap 3 I lost a around 1.5s to the guys behind as Nick in the SuperCopa went out wide at Druids and I didn't want him to collect me! Looking at the on-board I over-reacted.
The next few laps were lonely and uneventful as the guys in front pulled away and I got the gap to almost 5 seconds. During this time, I started to struggle with the gears again, with the clutch pedal not clearing properly. I decided from around lap 6 to leave the car in 4th for the full lap, which was not great around Druids and Clearways, where a 3rd gear drag would have been much faster! The clutch feel would come back randomly, I would get a few good changes then would struggle again.
Liam Crilly in the Z4 Coupe had been holding up the Bradleys in the M3, but after they managed to pass him, they begun to close the gap on me by fractions of a second per lap until we got into traffic. They we were trading better times, sometimes I was 0.5s up, others they were.
I felt like the tyre pressures had come up and wanted to see if a bleed on the slave would help again, so I pitted as soon as the window was open on lap 19. As I dropped into the pits, the car refused to go into any gear at all! 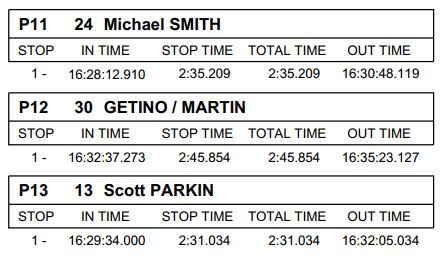 While sat in the Pits I had TSL up keeping an eye on the 78 M4 of the Bradleys and saw they were putting in their best laps of the race while I was sat watching the clock!
Despite messing around over the line trying to find a gear, I had started my pit timer well, so our pit stop was actually the best of the field. Liam Crilly in the Z4 had messed up with a short stop so ended up with a Stop / Go Penalty.
I came out of the pits and was back into the rhythm doing lap times in the 54s until a car stuck in the gravel on lap 30 brought out the safety car.
Considering I was pulling a decent gap, and I was still having issues with the gears, this was not ideal, as I would be vulnerable at the restart.
For some unknown reason at the time, the safety car just picked up a random car, then started to wave everyone past, which caused further confusion and muddled up the grid, with the Bradley's right at the front of the train, and me at the back with Liam Crilly in the Z4, just behind Michael in the Ibiza.
At the restart I knew I only had to worry about the Z4, so I left a decent gap between myself and Michael so I could start to accelerate well before Clearways, and hopefully pull a gap. It worked as I was 0.5s in front over the line.
I could see the light at the end of the tunnel, but it was not meant to be. As we slowed down into the hairpin at Druids, I accelerated out and the car cut out. I desperately tried to restart it, but it was in vain. I had to pull to the side of the track and retire from the race with 12 laps remaining. Gutting. 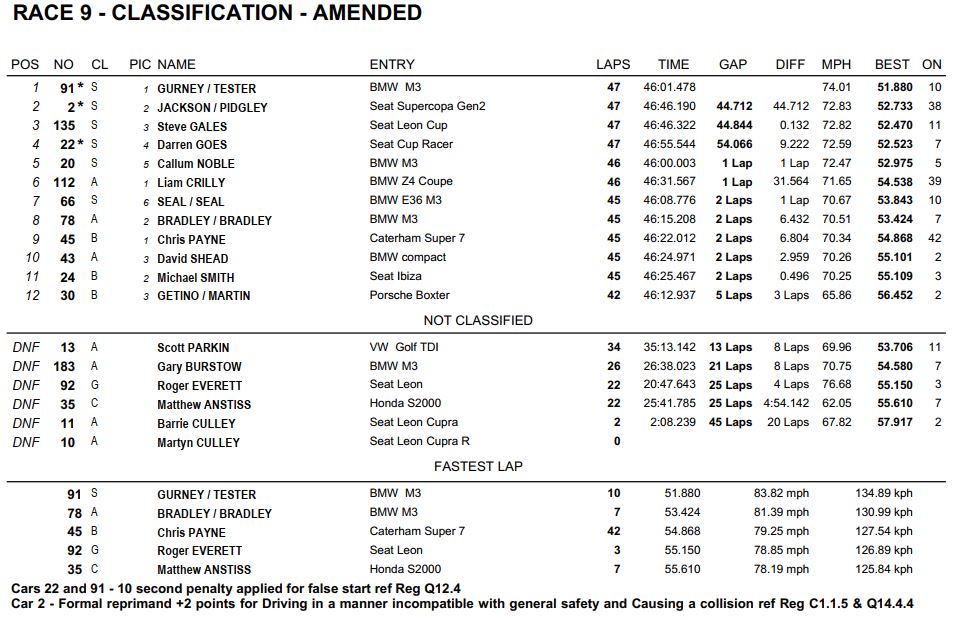 Michael managed to hang on to 2nd in Class B, with not too much of a gap between him and Chris in the Caterham. I believe with this result, he should have sealed the Class B Championship for the 2020 Season. An excellent result for his first year racing in cars, and it is great to see the Ibiza still fighting at the front! 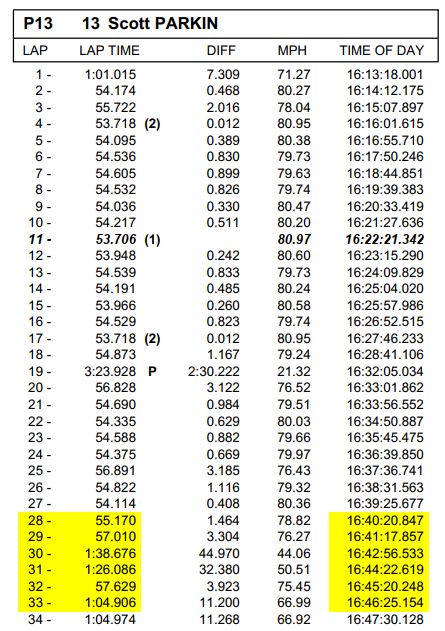 A video of the full race is below, apologies for the lack of commentary at the start. I left the recording up to someone back at work who I shouldn't have!:

After the race we diagnosed the issue as a faulty lift pump in the tank. Despite their being 2 other pumps in the system, the interruption to the fuel supply was enough for the engine to cut out and not restart during the race. We always said that the Golf would be a front running car, but you need to finish races to win, and it is hard to find all the little niggles in a car whilst trying to race in two separate championships as well!